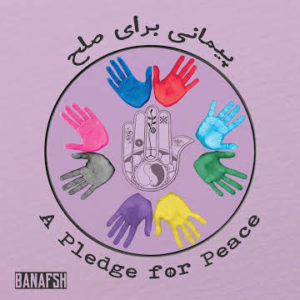 Step into another world – a far off land to the East. Your mind wanders. Your soul searches for a comforting friend and moral compass. You find what you’re looking for when you come across Iranian band, BANAFSH. Their new single “Soul Man of the East” transforms your mind into a meditated state, all you hear and feel are their ambient strings, percussions, keys and father-like vocals.

BANAFSH is a nine-member band that hails from Tehran, Iran. Tehran is Iran’s largest city and it also happens to be one of the most populated towns on the planet. It makes sense then that a band with rich, centuries old culture would utilize its backyard for inspiration and elevated sounds. There are men and women in the group. I was expecting to hear a bit more female-backing vocals, but I couldn’t quite capture their sound. Perhaps seeing them live would be a different experience. Let’s face it, sometimes bands sound better live anyway.

I’m not saying that’s the case with BANASH, but I would gander the females in the band likely have a more spotlighted sound on a larger stage. I would hope.

I think what BANAFSH does best is create a pallet for the listener that is basic – they don’t try and overwhelm the listener with a loud ruckus; they don’t try and put EDM with jazz. They simply fuse together electrical instruments with whispers of traditional Eastern instrumentation. It’s modern enough to not feel like it belongs in a certain era. It doesn’t feel dated.

Vocalist, Payman’s delivery is a bit striking. At first. He grows on you. He has such a deep voice it’s reminiscent of Vincent Price in “Thriller.” Okay, not that scary! He’s commanding, but still charming like in a father figure way. The lyrics are very easy to follow: “I’m speaking, as the soul man, of the east. I sing with any rhyme that you please.” He wants to be your friend. He pleads with you that their mission is peace and no matter your stance, don’t judge them because they life in Iran. Or, don’t just assume things.

Kudos to BANAFSH for wanting to lead the charge and become musical peace ambassadors. I think they accomplish this in “Soul Man of the East.” It’s the first track from their upcoming album, A Pledge for Peace. I think it’s easy to get caught up in just the lyrics and forget the moving arrangements in this song. The guitars really rock – and the violin segments are mystical and immediately transfix your mind to another world. You can dance to this song. You can meditate to this song. You can exercise to this song. Not only is it a fun track (it grows on you), but also you find yourself reflecting on it hours later.

Overall, this track garners a 4 out of 5 stars. It’s a nice introduction to world music for new listeners and music lovers will fall for the guitars.