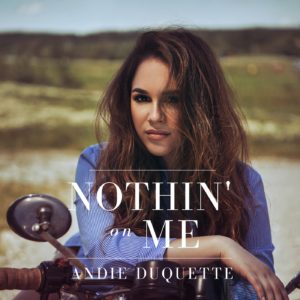 Andie Duquette is a Canadian country rock singer from Montreal, Quebec. She’s been known to favor a dab of “edge” in her personal brand of country music, whether we talk about her strong and direct “women first” lyrics to some of her more robust songs. You’ll find Andie to be somewhere between Shania Twain and Miranda Lambert but there’s no mistaking it: this country girl is definitely rock’n roll and she wouldn’t have it any other way.

In 2013 Andie was a contestant of the hit TV show “The Voice”, Quebec’s version of “The Voice”, where she was a strong semi-finalist. Tino Izzo (Celine Dion, Bobby Bazini, The Wilkinson’s, Roch Voisine, Garou, Jacynthe, Yuna Ito, Saya to name a few) asked to work with her. Tino and Andie started working together in 2014, putting in countless hours and
working hard to develop something distinct, something totally Canadian, and something they feel absolutely committed to. Andie, in the meantime, released her 1st solo French album in her native Quebec in 2015 where she was extremely well received.

Now signed to the Spectra Music Group, Andie Duquette is preparing to release her debut album “Here We Are” in late summer 2018.

Watch the “Nothin’ On Me” music video here:

The official music video for “Nothin’ On Me” by Andie Duquette. Copyright 2018 Spectra Music Group. All rights reserved.

Call and request the “Nothin’ On Me”  by Andie Duquette at your favorite country radio station today!

Pre-Order your copy of “Nothin’ On Me” by Andie Duquette on iTunes in the United States here:

Mike Greenly: On the Release of “Common Ground” by Eileen Shapiro

The anthemic and peace driven song, “Common Ground” has just been released via TRAX Records, as a hot new dance track remixed by iconic DJ Tony Moran, and promises to be the hit of the […]

Billboard Chart Topper Brian Grilli To Release Highly Anticipated New Single “Get Out Of This Life” on Friday July 12th, 2019