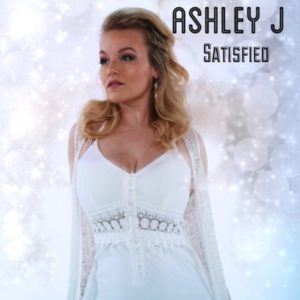 Hailing from Orlando, Florida, Ashley J has been pursuing her musical dreams from a young age, has the benefit of an academic musical education, and has shown a willingness to follow her heart wherever it leads through a handful of initial singles. Her new single “Satisfied” is a remarkable effort in every way – it connects with listeners as superb musical entertainment while still presenting itself as a composition and performance capable of saying something of real substance. It exhibits the same wont she’s shown in previous songs, but the difference here is it more developed than previous efforts and shows her blossoming maturity.

Ashley J clearly surrounds herself with first class production and musical talent to help her realize her musical ambitions, but she is the indisputable center of the song and her intensely felt performance defines much of its quality. The power of her voice is impossible to deny, but she brings an equal talent for delivering the lines to bear as well. She has some good words to sing, all clearly composed to help serve her and the musical backing, that explores the song’s familiar subject matter with a distinctive voice, and she brings them to further life thanks to the highly charged way she lands on certain phrases and the end of some lines. Her work during the song’s chorus is particularly notable. She has enormous ability for matching the rise and fall of the arrangement’s intensity without ever overstepping her intentions and diminishing the quality of her backing track. These are the sort of excellent performance and artistic decision we’d normally hear from someone recording music much longer than Ashley has, but we clearly aren’t dealing with a run of the mill talent here. It’s no stretch to say she’s a special singer and there’s no question this song would come to even more vivid life in a live setting thanks to her explosive vocal qualities.

Thankfully, however, the arrangement is no mere afterthought. The pacing of the song plays to her strengths as a singer while still embodying a welcome energy level and there’s time enough during the song’s three minute twenty second span for each of its musical ideas to feel and sound like finished products rather than rushed and abbreviated. The onward rush of the song’s synthesizer and electronic based construction nonetheless conforms to same basic rules about quality songwriting and brightens them up thanks to the inspired variations thrown into the mix. All too often it’s the backing track in this sort of music that gets the lions’ share of attention, but there’s an overall balance to this song that bodes well for any further upcoming releases from Ashley J. She’s taken no shortcuts, pandered in no way, and has given every bit of her sweat and passion to making this song work. The effort expended paid off handsomely as “Satisfied” begins 2018 for her in a decidedly auspicious way.