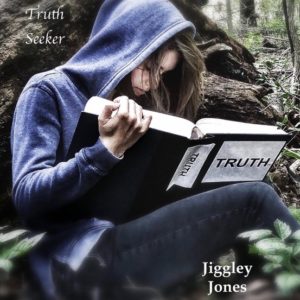 “Throughout life, the search for truth can be a never-ending journey. In this new single, and music video, the search for the truth is pursued. The song encompasses the whole idea of the struggle for truth and whether you are one that embraces the journey.”

Coatesville, PA [March 15, 2018] Truth Seeker, the brand new single release from Alternative Country/Folk, singer-singer Jiggley Jones is without a doubt, one of his finest songs to date. Its apparent strength allows it to stand alone, separate from his album release “Not Your Typical Day Out” and it’s clear to see why the song was chosen to be released as a single.

Truth Seeker has already been reviewed by many high-profile music critics and has received much acclaim and nothing but highly favorable reviews. The song itself though isn’t literal but encompasses the whole idea of the struggle for truth and whether you are one that embraces the journey. The professionally produced music video does, however, depict an actress who pursues the search for truth in a literal way as she runs through the woods desperately seeking the truth. In the end, she finally finds it in the form of a book buried under the leaves. The music video is dramatic and extremely well done.

Winning many awards, and charting on multiple-genre music industry charts, Jones is recognized as one of the most accomplished and unique singer/songwriters emerging today from the folk/Americana and alternative country arena in the modern day music market. His songwriting paints a picture and also demonstrates a discernible commercial edge that, still, never caters to the listeners. Truth Seeker is a listen for music lovers with a discernable taste for original, yet not necessarily typical mainstream songs. Jones will always be himself, and nobody else.

“Jones has that completely original and unique sound that I look for in an artist,” States his Publicist Casey Alrich of Allure Media Entertainment Group. “The first time I listened to the new album Not Your Typical Day Out, the single Truth Seeker, and songs from his previous albums, I knew this was an artist that I wanted to work with. Songs like the latest single Truth Seeker, Walk on Me from his second EP on the Nashville Label Lamon Records and Baby Blue from his first Independent EP release No Spring Chicken, absolutely gave me the chills.

“His songwriting is relevant and fresh, and he has a vocal style all his own,” says Grammy- nominated Nashville producer and label president Dave Moody”. Reiterating that same sentiment former manager Michael Stover once mentioned that “Jiggley has that one-of-a-kind sound…his songs will touch you and move you with their beautiful lyrics and melodic strength”. “It’s fresh and different, and speaks for itself”.

“Let’s face it, I’m not 18 anymore, and thank God for that”, says Jones. “I’m no longer coming from a place where I feel I have to ‘fit in.’ I’m coming from a place that is different because that is what I’ve become. That is what I am consistently trying to portray in songs like Truth Seeker and my music in general and I sure hope I have accomplished that. – I think I have”
.
Follow this amazing artist and learn more about him at his official website www.jiggleyjones.com

The song “Truth Seeker” which is available on itunes, etc… was written and produced by Folk Rock singer/songwriter Jiggley Jones, mixed and mastered by Phil Nicolo at Studio 4 in Conshohocken, Pa.

“Jones is hailed in many quarters as one of the most talented singer/songwriters emerging from the folk/Americana scene today, but his songwriting also demonstrates a palpable commercial edge that, nevertheless, never panders to listeners.” Clay Burton / Independent Music and Arts, Inc. – Imaai.org