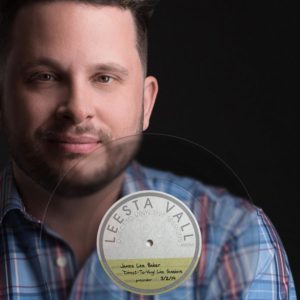 “He’s got such a heavenly voice and talent for writing deeply inspiring and intimately connective songs that to call him anything other than brilliant would be criminal.” – No Depression

In 2017, James Lee Baker released a Texas-inspired full-length project called “Home Again,” a Country-flavored Americana album, rich with instrumentation like dobro, lap steel, fiddle, and harmonica. In March, he released an EP of Folk/Americana songs called “The Canadian River.” The single of the same title placed #23 on the FolkDJ radio charts in April of 2018, and the song “Two Cageless Birds” went on to be selected for the John O’Hara Songwriting Performance Grant. In the winter of 2018, his single, “Cowtown Blues” reached the Roots Music Report Contemporary Folk chart Top 15.

Now, James Lee Baker is offering his most-dedicated fans a rare and exclusive opportunity to have a truly unique piece of music history. On March 2nd, 2019, James will enter Leesta Vall Sound Recordings studios in Brooklyn, NY, where he will cut one-of-a-kind, direct-to-vinyl master recordings of his most beloved songs. James’s fans will have the opportunity to pre-order the songs of their choice for their personal master recording. Each master will be done live in one-take, with a personalized message addressed to each individual. The recordings will not be duplicated…ever.

“This is something that James’s fans will cherish for a long time,” said Michael Stover of MTS Management Group. “Knowing how much James values each and every person that listens to his music, I know that he will put his heart and soul into each recording. This is going to be something really special that even the casual fan will want to get their hands on.”

Pre-orders are being taken at leestavall.com/products/jamesleebaker

Leesta Vall Sound Recordings is a niche record label based in Brooklyn, NY. Our limited edition lathe cut record releases are made on modified vintage record cutting lathes. Each record is handmade, one at a time, in real time, by a real person. leestavall.com