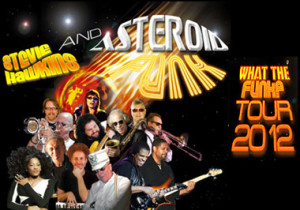 Blues Brothers Band Members Join Stevie Hawkins For What The Funk Tour 2012
You have heard these musicians and vocalists on countless, timeless hit recordings. Now, see and hear them live on stage!

Through a collaborative effort in support of the new critically acclaimed CD release titled “What The Funk?” that is receiving radio airplay globally, Stevie Hawkins, “2012 Artists In Music Awards Winner as Best Jazz Artist” and Asteroid Funk are on course to blast the planet in full force, with megatons of authentic Funk, Soul, Blues, Jazz and Rock, in a magical, entertaining, high-energy live music experience and show on their “What The Funk? Tour 2012”.

“What The Funk” is a fabulous collection of songs with lyrics written by Charlotte Hannon and Stevie Hawkins, and are performed by Hawkins and some of the world’s premier musicians and vocalists. The album is a definitive, timeless and distinctive blend of funk, soul, rhythm and blues, jazz, Latin and rock.

The Super-Group, Stevie Hawkins & Asteroid Funk, will launch their highly anticipated tour, playing festivals and arenas throughout the summer and fall in Europe, the U.S.A. and beyond. An elated Hawkins says, “The band is incredibly tight, delivering a high-energy, thrilling fan concert experience, capable of producing awe-inspiring, emotion-filled moments both visually and musically. We will soon be announcing a surprise, legendary blues artist that will making special guest appearance performances at select shows. The excitement level for us is extremely high!”

Host Uncle Earl on KCLA-FM and KLED-FM Los Angeles recently expressed with regard to Stevie Hawkins & Asteroid Funk’s music, “I’ve been waiting on a miracle, and here it is. A must for anyone serious about great music”. Skip Dillard, program director of WBLS-FM Chicago says about the “What The Funk” album, “This is the kind of music performed “live”, that people will pay for!”

Through the artistic vision and direction of the incomparable choreographer Lacy Darryl Phillips, a captivating fusion of visuals, dance, and music immerses the audience in a show not soon to be forgotten. Phillips’ professional background as Choreographer and Director for Television, Stage and Film includes: Bette Davis, Gregory Hines, The Academy Awards, Vanessa Williams, Sandra Reaves-Phillips, “Sister Act II”, “A Chorus Line”, “The Wiz” starring Peabo Bryson and Grace Jones, CeCe Peniston, and was Associate Choreographer/Director for Mariah Carey’s “Around The World” Tour.

Stevie Hawkins And Asteroid Funk “What The Funk? Tour 2012. This is a show not to be missed.