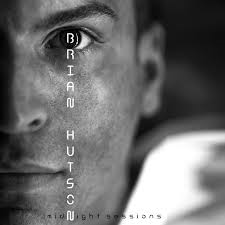 Midnight Sessions, a five song EP release, does something that few pop oriented releases can ever manage – exhibiting full on pop music appeal while still speaking to adult concerns, all in an entertaining fashion. Hutson’s vocal chops are unquestionably the centerpiece of the release, but he’s well backed by some expert musical performances that err on the side of brevity and, in turn, create a stylish and often elegant musical landscape for his voice to inhabit. Renowned producer Joe Vulpis has an outsized influence on the presentation of Hutson’s music and he wisely emphasizes Hutson’s phrasing and emotive edge while still keeping the instrumental virtues firmly in focus. Midnight Sessions has nice atmospherics, as well, and Vulpis works with Hutson to show quite a steady hand in this regard; not a single song can be heard as self-indulgent in this regard. Instead, Brian Hutson’s debut EP builds on the promise of his first single and shows this promising vocal talent and songwriter taking the next necessary step into his future.

“Break My Heart” introduces the EP in a way sure to provide comfort for first time listeners. Hutson places his audience in recognizable territory, both in terms of music and subject matter, while impressing with stylistic choices and a personality that are all his own. Piano is the primary instrument on this song, but it never overwhelms the other instruments and, instead, the song reveals Hutson as a steadfast adherent of blending various strands into a wider ranged, coherent whole. You might expect, based on title alone, “Kiss Me Feel It” to be a far jauntier number, but Hutson opts for keeping emotion on a low but steady simmer throughout the entirety of this tune. He leans on guitar more here and it’s recorded quite nicely – detail and warmth alike help make it one of Midnight Sessions’ more memorable musical performances.

“One Night Stand” continues the same mood as the previous two numbers, especially during the verses, but producer Joe Vulpis and Hutson earn our attention and respect with an exhortative chorus that connects more solidly than virtually any other single instrumental passage on Midnight Sessions. We hear a bit more of his songwriting sleight of hand as what the title suggests about its lyrical content really has nothing to with the lyrics at all. “Behind the Wall” is a much harder pushing tune than anything else on the EP, bonus truck included, and sports some particularly big guitars to drive home its sentiments. Hutson ramps up his singing for this one, as well, and throws himself into the song with abandon. “Keep the Faith Alive” is deemed a bonus track, but what is typically a bit of filler on many releases is, here, a viable part of the EP as it was released and finds Hutson in an interesting moment of self reflection as a listener and winning over listeners with a show-stopper vocal. It’s the final crowning achievement on an EP certain to turn ears in his direction.