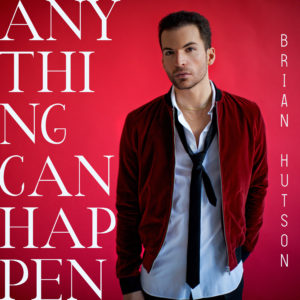 Brian Hutson – Anything Can Happen

The near-certain success of Brian Hutson’s latest single release “Anything Can Happen” will likely move this young New York based singer into the upper echelon of singing talents in popular music today. His 2015 discovery by producer Joe Vulpis has lead to a number of important and entertaining releases like his idiosyncratic cover of the Christmas classic “Blue Christmas” and the EP release Midnight Sessions and his new song builds on their quality while expanding his reach further than before. Hutson’s voyage from his Hudson Valley upbringing, working on Wall Street, and finally making major forays into the popular music world is an unique tale even for these modern times and you hear that excellence reflected in every minute of “Anything Can Happen”. It’s a winning effort from a young performer who has a limitless future and a bright 2018 ahead of him.

You can hear the promise in his voice. The entirety of “Anything Can Happen” is practically a vocal clinic with Hutson dispatching one inspired turn after another and showing unflappable instincts for knowing what the song needs. A lesser performer might have been overwhelmed by the idea of living up to Hutson’s success thus far, but he sounds galvanized by the opportunity. Despite the obvious fact that this isn’t a live performance, it’s difficult to not hear how Hutson’s vocal is completely informed by the musical arrangement and spills out of him in a stylish release that explores different channels in the listener’s emotional register. He consistently shows the same mastery of song that you hear from much older artists, particularly the iconic ones, and Hutson’s supreme confidence is one of the track’s most vivid features. He especially excels during the song’s chorus and it’s one of the track’s best moments overall.

There aren’t a plethora of instruments involved in this song, but the sounds present are woven together in a substantive thread that evolves nicely from the first and has a sense of knowing where it’s going from the first. Acoustic guitar lines nearly act as a second vocalist matching Hutson’s voice at various points in the song, but assume a capable supporting role at other points as well. The bass and drumming on “Anything Can Happen” give it some additional force, otherwise it might float rather dreamily – that foundation is important to the song’s overall success. The beauty of a song like this, ultimately, lies with how natural it sounds and it moves from a rather simple beginning into something much vaster and grander sounding. Brian Hutson’s career trajectory, thus far, has been one of the most memorable in recent memory and the new single “Anything Can Happen” brings home the reality, once again, that this is one of the best young performers coming into the scene for some time. It’s a great beginning to 2018 for Brian Hutson and will only get better from here.