Cherie Oakley, the breakthrough country performer and writer behind a Billboard #1 by Reba McEntire, lands her debut single Work It on Radio Disney Country. Listeners can tune in today on the Radio Disney or iHeartRadio app to hear the tune that CMT called the “sonic love-child of Jessie J, Ariana Grande and Nicki Minaj’s Bang, Bang and Christina Aguilera’s Fighter for a country audience.”

“I am so excited that Radio Disney Country listeners will now get to hear Work It!” says Cherie. “To be featured on a platform that supports female voices is fantastic. I hope the new listeners enjoy this tune and feel inspired to Work It while they’re streaming the station.”

Check out the official music video for “Work It” by Cherie Oakley. Directed by Patrick Tohill Cherie Oakley’s newest single “Work It” off her soon to be released self titled EP is now available at any of the links below!

Cherie grew up singing with her family full time on the road in evangelism touring churches, fairs and festivals. Music wasn’t her only passion that began at an early age. She also started acting during her childhood appearing in various musical theater productions. Moving to Nashville at the age of 20, Cherie began singing background vocals in the studio and on tour for acts like Carrie Underwood, Kelly Clarkson, Gretchen Wilson, Martina McBride, Mary J. Blige, Idina Menzel and Amy Grant. She would score a breakthrough as a writer when Reba McEntire charted her 60th Top 10 career single with Turn on the Radio penned by Cherie, Mark Oakley and J.P. Twang. The song would go all the way to #1 on the Billboard Hot Country Songs chart on January 1, 2011. That same year, Cherie would make her debut TV appearance on the premiere season of NBC’s hit series The Voice, landing a spot on Christina Aguilera’s team. After building a grassroots following on the singer-songwriter circuits, Cherie signed with Number One Group in 2017 and started work on her debut EP under the wings of ACM and CMA award-winning producer Dann Huff which will premiere in the fall of 2019. 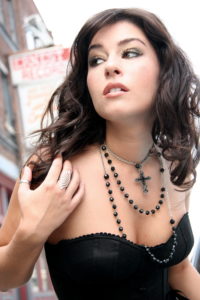 Work It is available on all major online retailers including: iTunes, Apple Music, Amazon, Google Play & Spotify. Penned by Cherie, Mark Oakley & David Fanning, Work It came to life in the recording studio under the wings of legendary trailblazer Dann Huff. The Huff family influence also transferred to the video set when Dann’s daughter Ashlyne choreographed the dance scenes. The video has premiered on CMT and The Country Network and is currently airing at gyms across the U.S. and Canada. The song recently received the DisCovery Award from famed reviewer Robert K. Oermann of Music Row stating that this is “a peppy, female empowerment banger with crunchy beats and a slight soul sister vocal vibe. Shake your groove thang.”