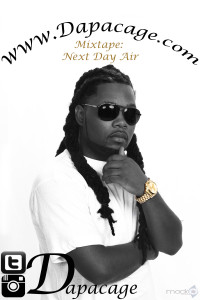 Craig Denson, also artistically known as Da Pacage, is a strong, out-of- the-box, American Hip Hop performer that was born on a unique 9th of May almost 28 years ago (1988) and raised in Fayetteville, North Carolina. He is the father of two beautiful children and married to what he describes “a hell of a woman”.

Denson’s interest for music began to develop at a very young age. He was influenced by powerful artists such as Tupac, Jay-Z, Nas, Jadakiss and Young Jeezy to name his favorites. He states that his music comes from the influence of these top performers that along with his world’s point of view and personal experience inspired the amazing lyrics he breaks down in his mixtapes. He has been true to the fact that everything you listen on his page is who he is and where he comes from.

“Music is more like a therapy to me,” says Da Pacage.

With his live presentations, he has made himself space in hip hop as a rising star. So far, his nonstop work has earned him The Iron Mike Battle Championship, defeating other promising performers. Also, Being the Foxy 99 Underground Champion for over a week; and being the very special performer opening for Plies at the Florence Civic Center. At this last performance, he got a standing ovation from the crowd who asked for more. He has participated as well in many events in the Atlanta GA Area.

One of his most outstanding performances was on October 1, 2014, where he took the Blackthorn

51 stage in Brooklyn, NY and tore the house down. On February 28, his talent awarded him the CIAA Competition in Charlotte, sponsored by the great DJ Chuck T. On August 3rd he got himself an audition in Fox’s Next EMPIRE Artist in Charlotte, North Carolina and keeping up with the streak; he had a stunning performance on the Fayetteville Motor Speedway opening for no less than Kevin Gates in August 16. Currently, he’s working on a mixtape with Roc Brown for Fayetteville collaboration while preparing for September 20, when he will be opening for famous Young Dro in

Da Pacage has shown through media, that his eager to listen to his fans opinions, from working ideas, sending beats, songs or advice about music; he just asks to hit his inbox. He’d be more than glad to collaborate with others and pass out some knowledge.

To have a better insight of Da Pacage or booking to enjoy an amazing performance, go over to his facebook page at