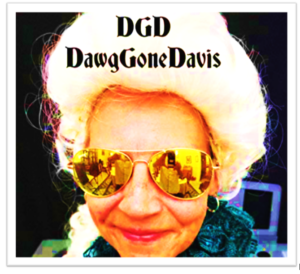 It’s abundantly clear that Dawg Gone Davis knows and loves music. The four songs included with her EP collection In the Dawg Pound hits a fun and intelligent note with the track “Forever Music” and the IT professional proves she is no novice as she reels through a number of often humorous observations accompanied with smart rhyming and astute phrasing. Her willingness to incorporate horns into the track hints at a daring in her approach matching up nicely with the humor and the focus of the song, never wasting listener’s time, is ideal for a performer who might be unfairly tagged with the label of a novelty act. This song, and everything that comes after, gives lie to that slur.

She definitely wants the audience to have fun however. “Butt On Fiya”, while obviously autobiographical in humorous ways, makes light of its situation in a way listeners will enjoy. The brass presence isn’t as omnipresent with this number as it is with the first, but contributes a lot to varying the largely electronic backing. I can’t say enough about her delivery – as a vocalist, she instinctively understands how her phrasing encourages a listener’s involvement in the track and connects with listeners on both a mental and physical plane. I think it’s one of the EP’s most enjoyable tracks and enormously fun. This last fact is crucial – while it is clear that Davis is having fun here, the most important thing is how she presents her songs in such a way that the listener has just as much fun.

“Middle Aged Woman – Hip Hop Style” was Davis’ initial introduction to the music world and it still stands as one of the more effective hip hop singles in recent memory. Longtime music devotees will enjoy how she mixes in a variety of reflections on the presumed incongruity of a middle aged woman tackling a genre typically pegged for the young, but she whips up plenty of lyrical and vocal pyrotechnics to prove she more than belongs. This is far more based around keyboards and synths than the previous two tracks, but Davis more than compensates for their absence with a vocal performance illustrative of how and why she’s garnered so much attention.

The track “Anthem Pandemonium” escalates in a way we don’t hear with the other songs and has a bit of profanity thrown into the mix, but never in an objectionable way for me. Instead, it’s another example of how Davis has a lot of tools at her disposal to make tracks diverse and entertaining, particularly working alongside producer Helmutt Wolf, and provides the EP with a bracing conclusion. This Kansas City, Missouri based performer is definitely cut from a different cloth than many of her peers and contemporaries, but she unabashedly loves what she does and provides us with individual entertainment and musical vision. You can’t dare call her an imitator. Instead, these four songs shine as testament to what a singular voice can still accomplish in the music world and we’ll likely enjoy further release after she’s enjoyed well earned success from the release of In the Dawg Pound.

The proceeds from the sale of this EP go directly to OPERATION BREAKTHROUGH: operationbreakthrough.org/

The music of Dawg Gone Davis has been heard all over the world due to the radio plugging services offered by Musik Radio Promotions. Learn more – musikandfilm.com