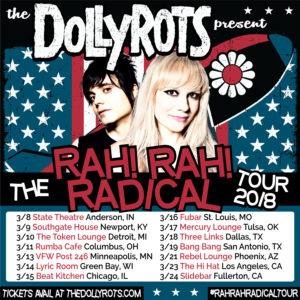 THE DOLLYROTS TO HIT THE ROAD ON THE “RAH! RAH! RADICAL TOUR”

THE DOLLYROTS TO HIT THE ROAD ON THE “RAH! RAH! RADICAL TOUR”
THIS MARCH

“There are enough joyless punk screamers and pretentious Green Day-lite bands out there but far too few, like the Dollyrots, who can channel the frothy, punchy brilliance of ’90s-era Josie & the Pussycats” – All Music Guide

The Dollyrots are gearing up to hit the road on the “Rah! Rah! Radical Tour” kicking off on March 8th. Dates are below and tickets are on sale at: www.dollyrots.com/web/tour/.

The band will also be releasing a new limited edition, half red/half blue vinyl 7-inch single on Little Steven’s Wicked Cool Records. The release includes a new Dollyrots original song, “Get Radical,” and their unique take on Rancid’s hit “Ruby Soho.” The 7-inch will be available through www.WickedCoolrecords.com and the band’s official online store, digital available everywhere.

The band’s 2017 album Whiplash Splash is available on CD, aqua-blue vinyl, and digitally on the band’s very own Arrested Youth Label with distribution via MVD Entertainment Group. The album was completely fan-funded, with production by the Dollyrots and longtime producer John Fields. With buzzing guitars, booming bass and Kelly’s sassy vocals, the duo delivers the perfect mix of pop, punk and rock as they continue to have fun and melt faces.

The Dollyrots have recently launched at Patreon. Support them for exclusive content, music and more and become part of their Patreon community here: www.patreon.com/thedollyrots

Wicked Cool Records evolved out of “Little Steven” Van Zandt’s weekly syndicated radio show and SiriusXM channel Little Steven’s Underground Garage. Van Zandt founded the label as a way to further support new rock & roll that wasn’t receiving the recognition it deserved. Among the label’s releases are ten critically acclaimed compilations including Halloween A Go-Go, Christmas A Go-Go and The Coolest Songs In The World Volumes 1-8, featuring music from the Underground Garage. In 2016 Wicked Cool Records began a unique distribution deal and partnership with The Orchard encompassing both the label’s back catalog and all new Wicked Cool releases, releasing albums from WYLDLIFE, Soraia and more.