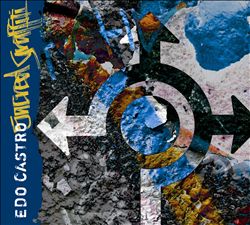 Review: Sacred Graffiti is one release that certainly doesn’t disappoint. This is artist that brings to the table effective songwriting via an impassioned playing style. This meshed with an elite Jazz-Fusion sound make for a very effective combination no doubt. Castro’s has an amazing Jazz sound but even manages to venture into Ambient, New Age territory as well – however he elects to take the high road and methodically never crosses the line into cheezy Smooth Jazz territory. All songs are wonderfully simple but masterful in their overall arrangements. Music reminded me of a cross between Pat Metheny, John Scofield, and Jaco Pastorius. One would be wise not to underestimate how incredible an amazing bass line can be. This CD is quite entertaining overall with an amazing feel. In this aspect Castro is a master musician. In my mind he is a musical triple threat. He is a world class songwriter; he has an amazing feel and has the X-Factor. What is X-Factor? It is the passion within and it’s something artists have to be born with. It’s not taught in any textbook but can be felt when listening to the music. Castro has X-Factor. His playing is straight from the heart and offers a very strong and confident soul searching perspective and artistic spirit. All song do exactly what they are meant to do via well-crafted movements and top tiered musicianship. The overall production value is superb with a crystal clear sound quality and solid low end frequency.

My favorite track is Sneaky Pete.

Criticism: I’m not a big fan of the cover art concept to be honest.

Conclusion: Edo Castro has proven himself yet again with this latest release. He is clearly an accomplished player and composer and he goes beyond proving anything. I must admit “Sacred Graffiti” sucked me in like a powerful drug and refused to let go long after the CD was over. This usually indicates something special about the artist or band in question. Thus deserving praise, recognition and musical fame at the international level.