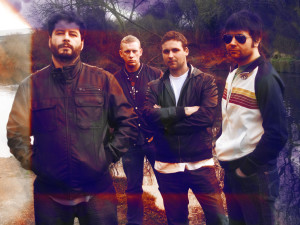 Et Tu Bruce hails from England (West London) and just released their fourth release to date “Suburban Sunshine” in 2012. They have received many impressive accolades thus far during their tenure as a band, and have been compared to bands like The Beetles to The Beach Boys for starters.
Meet the band – Jamie White (Guitar/Vocals), Matthew O’Toole (Guitar/Vocals), Darrin Bruce (Bass) and his brother Craig Bruce on Drums.

“Suburban Sunshine” (2012) is their latest release and it has much to commend it. Admittedly, there is a whole lot of variety to these arrangements and performances. First: the band’s delivers rock solid playing like a well oiled machine. This is testament to hundreds of hours of rehearsal time no doubt. Second: the songs are extremely catchy and melodic. These guys have all the attributes required of an effective band from the UK and their vocal harmonies will remind you of Yes and The Beach Boys. Third: their sound and amazing songwriting touch are as good as it gets for Alternative Rock. All songs are a skillful combination of modern pop rock yet with a slight quirky aftertaste that will remind you of They Might Be Giants, Todd Rundgren, Flaming Lips and even The Hollies. Et Tu Bruce possesses the creativity and songwriting prowess to be extremely dangerous. There is also a unique quality to this catalogue that breaks the mold when compared to the mundane pop-rock that’s been filling the airwaves lately. What am I trying to say – well let m start by saying there is nothing fake and superficial about Et Tu Bruce. Not every square inch is filled with musical ambience delivered under duress – but musical space this allows the music to breathe on its own with passion that cannot be faked. Equally as impressive is how marketable this 10 song catalogue truly is. It covers so much ground and despite this it manages to not spread itself to thin across to many lines – nice touch. I’ve always said if you can play it a party, then it’s marketable. The music is extremely marketable in this respect – with a fresh sound that is passionate and entertaining very much like Et Tu Bruce. All 10 tracks will genuinely lift your spirits unlike most music you hear on the radio these days.

Let me go on record by sating Et Tu Bruce has no weaknesses that I can see and hear. They have everything and their latest release “Suburban Sunshine” is an endearing album limited by nothing. I would imagine in time we will hear more from them as they’ve released 4 CD’s thus far. Time will tell but I can honestly say this is one artist that is set up for marketable success down the road with her musical personality and fresh sound that gives modern music a well needed wake up call.