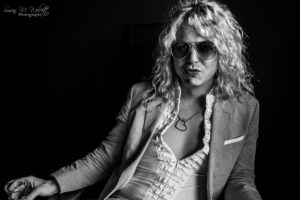 Aaron Hart and his glam rock outfit, Love Stallion have been on quite an “Unforgettable Ride” this past year. They’ve opened for some of the biggest names in the genre, and they’ve had a Top 5 iTunes chart single. Aaron sat down with us for an exclusive interview…

IMAAI: Hey Aaron! We’ve been fans of yours since the release of your debut album, “Unforgettable Ride.” Thanks for sitting down with us for an interview. You have such a throwback, classic, retro rock sound. Tell us, what inspires Love Stallion to create?

Aaron Hart: We grew up listening to the great classic rock of the 70s & 80s, and we’re always inspired by the big, high-energy sound, hooks, and fun performances. The project really started as an experiment, based out of the love for the genre, and it’s been the best years of our lives being able to create our own dream band, show, and share that with the world. We have had incredible feedback, and have loved connecting with everyone who so sorely misses that sound (like we do).

IMAAI: What was the inspiration behind your latest single, “Valentine?”

AH: Valentine, track 7 on Unforgettable Ride, is a nostalgic tune about a love lost, and wishing for one more sweet taste before it’s gone forever. We spent the most time on this one in the studio making sure we got the right space and feel. Whenever we hear or play it, it seems to put us in a trance.

IMAAI: What has been the biggest thrill for you, personally, regarding your Music?

AH: The time we opened for Steel Panther at the Fillmore Auditorium here in Denver in January. Not only did we meet our heroes, but got to perform for thousands, our biggest audience yet. The crowd and the energy were unlike anything we’ve ever experienced and goes down as the best night of our lives to date.

IMAAI: Congrats on many successes, awards, achievements…your videos have even been included in some pretty major film festivals. How did that Happen?

AH: Thanks! We have so much gratitude for (1) John Hunt at Arcadian Pictures for getting to know us so well, and making such high-quality & impressive videos, and (2) Michael Stover at MTS Management, who has done such an incredible job at getting both our music and videos out to not just the masses, but the right people. The Love Stallion team has grown quite a bit over the last couple of years, as it really takes an army to make all of this happen.

IMAAI: How important is social media in today’s music world, and how do you think the industry has changed over the past decade?

AH: Very important! Social media lets the world know what you’re up to, allowing people to connect on a deeper level with you, the band, and the music. I think this makes it so much easier for an artist to succeed and really levels the playing field for the independents.

IMAAI: You’ve been opening for some pretty well-known bands lately. What show has been your favorite, and Any plans for an all-out tour?

AH: Definitely Steel Panther! We hope to make it do some fly-in dates in Los Angeles this year, and then pack up the van in 2020 for a more all-out tour. We’d like to make the most of it by finding a tour we can join as an opener that shares a similar crowd.

IMAAI: Tell us about your solo EP, “Valentine?”

AH: I originally wrote Valentine on the piano and always wanted to share that version. During the writing of “Unforgettable Ride”, I wrote 2 other songs on the piano in a similar style. So, it felt a timely release to get this out there as we were pushing the band version song & video in advance of Valentine’s Day.

IMAAI: When is it time for a follow-up album to “Unforgettable Ride?” Are you recording now?

AH: We are! We are currently in pre-production with 4 new songs with Denver producer Christopher J Bloom, who produced my first solo EP back in 2011. We reconnected last fall and remembering the fun of a couple of those co-writes, we got together to work on one I had been stuck on for quite a while. After a few electric sessions, we decided to get to work on these new ones, 2 of which will be released with videos in 2019, both to be directed by Arcadian Pictures. At this pace, we’re expecting to release a new LP in early/mid 2020.

IMAAI: Any parting words for your fans, Aaron?

AH: We’re super excited to release 2 brand-new video singles this year of songs that will be featured on our next album. We’ll also be out playing lots of shows, so can’t wait to see you all soon!

The Pittsburgh-based country music artist and actor has released his first new music since his critically acclaimed “Legacy” debut album. This is kick-you-in-the-can country, if I’ve ever heard it before”- Michael Stover, President, MTS Management Group “Matt has a knack for embracing all of the cherished parts of Americana that made country special in the first place.”