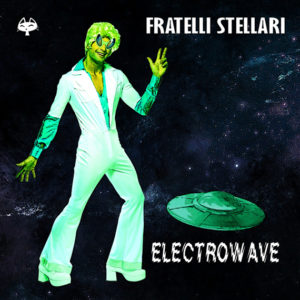 In their album “Electrowave” the Fratelli Stellari experiment new electronic sounds, also thanks to the musical collaboration with some friends. DJoNemesis, a member of the group, composed “Ultimatum Alla Terra” (music and lyrics) and he is the singer both in this track and in “Kampa Kamello”; Dorien Dorion, another exponent of the Fratelli Stellari, put his signature on “Undressing DJ Vequine” (music, lyrics and vocals), the song dedicated to the Vecchina dell’Aceto (The Old Lady of Vinegar). The Spanish artist Jupisoft composed the music of the track entitled “No Estás Solo En Este Universo” and took part in the writing of the lyrics together with his friend David Maeso; the Italian musician Merovingio Deejay created the melodies of “Destination Planet Earth”, he wrote the lyrics and his voice appears in the refrain.

Similarly to the previous albums of the group, in “Electrowave” there are songs in Italian, English, Spanish and French; among the new features we find a composition of ethnic genre, inspired by belly dance, ancient Egypt and the mysteries of the Great Pyramid: “The Pyramid Secret.”

In this 12 track album the Fratelli Stellari develop the topics they like: humor, some revelations (more or less explicit) on the extraterrestrials, some reflections about mankind and planet Earth present condition. For instance in “Salvami” (“Save Me”, a house music song interpreted by Ritanne du Lac) an old but sensual woman asks an alien being to take her away from Earth, which by now is reduced to a latrine; also in “Ultimatum Alla Terra” (“Ultimatum to Earth”) we encounter a complaint about the bad situation of the planet.
In “Kampa Kamello” the “divinities come from the stars” are mentioned, that is to say the alien people who created our ancestors. In “Mon Doudou Le Houx Doux” a game with French words is thought up to create rhymes, but there is also a reference to a nice alien coming from the planet Bijou; in “TSO (Psycho Mix)” Ritanne and the Vecchina dell’Aceto say that the involontary sanitary treatment did not produce any effect on them.

Finally, three semi-instrumental titles must be pointed out: “Moon Landing”, a sort of background music, a song for relaxing; “Gonna Make You Dance” and “Shake Your Body”, two dance tracks.

Musics and lyrics composed by Fratelli Stellari, except:

Full album and lyrics on Bandcamp