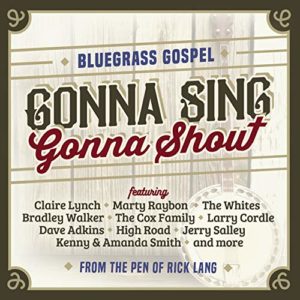 In the eponymous title track of the brand new compilation album Gonna Sing, Gonna Shout, Claire Lynch, Brandon Rickman, Josh Swift and producer Jerry Salley forge a harmony that seems to wash its accompanying rhythm in a sort of audiological holy water that makes every note sound blessed with beauty. Salley, Rickman and Bradley Walker do something similar with the tear-jerking “The Back of the Church,” while Walker’s “Henry Clayton Parker” finds its climax through the brawn and bristle of an old school bluegrass beat. These three sons alone would have been enough to warrant anyone who loves Gospel to give Gonna Sing, Gonna Shout a go, but in fact they’re just a taste of what composer Rick Lang has in store for us in this delicious collection of handwritten songs.

The country croon of The Whites enters Gonna Sing, Gonna Shout in “Don’t Tune Him Out,” which along with Marty Raybon’s “I’ve Read the Book” and “I See God,” as well as “There Will Be Singing” by The Cox Family, tell us in their own musical way of God’s undeniable presence in our lives, no matter where we go or what we do. Their intense hooks fuel the same sense of excitement that is synonymous with country church singalongs, though these arrangements are unquestionably more complex and calculated.

Kenny and Amanda Smith give us “They Were Fisherman” with as much enthusiasm as Larry Cordle exudes when he shells out “Sunday Morning Gospel Jubilee,” and though both songs are constructed with contrasting approaches they both symbolize the connection that Gonna Sing, Gonna Shout has with its predecessors. Aside from the contemporary polish, these two songs have a rustic quality that is more pronounced than it is in the other tracks. They feel ancient in nature, and yet still so relevant to our everyday life in modern times. Bluegrass is a time-honored slice of American musical history, and while this record doesn’t suffer from the limiting black and white mix of storied albums from another era, it isn’t shy about giving a nod to the forerunners who made its classic tonality possible.

Rick Lang’s lyrical sentiment here is so organic and friendly that intimidating compositions like “Thinkin’ Outside the Box” aren’t as eviscerating as they would be if not outfitted with centered, faith-based verses. There’s nothing artificial about Gonna Sing, Gonna Shout; from the melding of the music and lyrics in “Heaven’s Back Yard” to the slickly equalized timbre of Claire Lynch’s voice in the album’s crown jewel, the idea that this sound was provoked by anything other than a dedication to the medium is never given credence.

I’ve been listening to gospel since I was a little girl growing up in the south, and while the genre has become so fascinatingly diversified in the last quarter century of American music, it’s really nice to have a record like this one that draws its essence from a raw, roots-based music like bluegrass. Rick Lang’s songwriting here is simply breathtaking, and the performers who give themselves over to his work do so with a respectful integrity that is really something to marvel at. Gonna Sing, Gonna Shout will have you doing everything that its title suggests you should when giving praise, and that’s what this kind of music is truly all about.