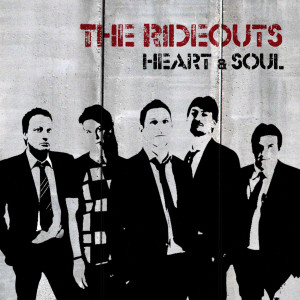 Heart and Soul: new record by the Rideouts, another important step for the band formed in 2003 between Trieste and Liverpool by singer-guitarist Max Scherbi. Today he is accompanied by: Andrea Radini on guitars and programming, Michela Grilli on backing vocals, Gianpiero de Candia on bass and backing vocals and Federico Gullo on drums. The strings quartet on two tracks of the album is formed by Davide Albanese and Paola Bezi (violins), Lucija Brnadić (viola), Jasen Chelfi (cello).

The Rideouts’ sound digs deep into the british-american bands of the Sixties. Pop, rock, blues and garage rock with a bit of psychedelia are the main genres while The Beatles, Hendrix, Cream and Led Zeppelin are the main influences.

BBC’s Richard Oliff (presenter, writer, journalist, producer who had worked over the years with artists such as Ringo Starr and Paul McCartney), fan of The Rideouts, has compared them to Eric Clapton and The Beatles.

Heart and Soul contains 11 tracks, a fine mixture of ballads and rock-blues, with a british-rock background (the album cover is a homage to Banksy). The album has been mastered at Mercury Mastering (California) by Blake La Grange (Grammy Award winner, who worked – amongst others – with Kanye West).

The Rideouts have nothing to envy other British or American bands, their sound is international, well-finished, and are second to none. They have received many positive reviews in fact: from the mentioned Oliff to the prestigious NME, which hosts a couple of Rideouts’ videos on its website.

The first single and video, directed by Carlo Paccorini, is the opening track Not Enough. With this album The Rideouts reach their maturity and show all their potential.

The Rideouts – Not Enough

The Rideouts – Not Enough

Video for the first single taken from the album “Heart & Soul”, out 28/01/2016 Director: Carlo Pacorini (www.carlitography.it) Actors: Giustina Testa, Massimiliano Borghesi Don’t believe in what they say Trying to manipulate Do things they want you to do Following their unfair rules Are you ready to change your mind

Biography: It all begins in 2000, when Max Scherbi moves to Liverpool to follow The Beatles’ footsteps. Here, he joins a project by Stewart Boyle, formerly member of a band called Bullyrag. In 2003 The Rideouts project starts taking shape and two years later Max records his first 4-track EP at Imperial Studios in Liverpool with Jay Irving (Spandau Ballet, Nate James, The Christians) on drums. He then returns to Italy (with a lot of experience and speaking fluent English). While focusing on the project, he joins Tillamook band (blues/jazz winners of the 2008 IBC’s Italian selection: in 2009 they represented Italy in Memphis). Members of Tillamook are Gianpiero de Candia on bass and Andrea D’Ostuni on drums. Max will record with them the album The Storm After The Calm in 2009. In January 2012 Matteo Moggioli joins The Rideouts as the new drummer and they record the second album All Day & All Night.
www.therideouts.com/The_Rideouts_official_site/Home.html