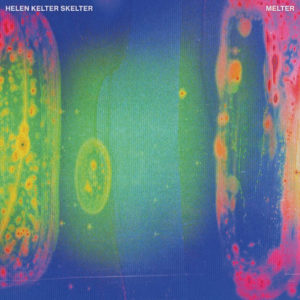 Melter, by the tongue and ear twisting Helen Kelter Skelter is their new album, their second release which make you long to hear their first album if you haven’t. Take the opportunity or start in the chronological order. It doesn’t make any difference because they’re chock full of everything that is good about all forms of rock, and the lighter side of it too. They seem to have it all and are taking no prisoners, or I am hearing things. Singer Eli Wimmer, bass player Cody Clifton, percussionist Scott Twitchell, guitarist Jay Jamison and keyboardist Tim Gregory, all rock with the best it takes.

Trip back in the mind to the 90s and then go all the way back to the 60s and you’re getting the picture of what they sound like. The album comes out flying right into your face on “21st Century” which is a track for all centuries by any measure. They loosely weave dance rock stylings with a surf and spy appeal. It’s a killer visit to the way back machine, like an amusement ride of melody and vocal swagger. There is nothing polished about it, but it sure sticks to the brain anyway. That’s something to find about HKS you won’t in very many out there, it’s contagious once you get wind of them.

“Gudd” plays like a signature track to demonstrate their dark side, and it’s something to get out of their system early on, so don’t lose sight of the prize with it. For some reason it sounds a little bit like Smashmouth with lyrics they’d never mature to. It’s very edgy but there’s something very likeable about it. And the album takes off from there with flying colors on “Palamino” with one of the higher standards kept on what is another slice of their own perfection. Their musical chemistry is fully displayed on this track which is a thing of beauty that reflects the title and pulls out all stops.

“Minding” is another story, with some guitar and keyboard passages of the jaw dropping level with some awe-inspiring work. They take you where nobody has in a while with songs that you can’t let go of once they sink in, and this is an up-front example of their ability to do so. It’s continued-on “75” but the pop side of his voice starts to surface more on this track, making it all-the more contrasting from the former but still complimenting it. One thing is for sure, these are all massively compelling tracks for all they contain and these two lead the bunch for my taste.

“Time Bomb” is where things turn and never look back, setting up the rest of the rocket to the moon of tracks. This is dirty and groove with drone dropping effects. If you like things dark, prodding along and moody, this is the token track for it. “Tracers” weighs in at about the same poundage but it’s the preferred mood of the two for me. Both do create the same level of magic, it just depends on whether you favor melodies to power chords. The album has it all for the rock fan and plenty for the alternative and the rest to dig into. It will turn you “Inside Out.”