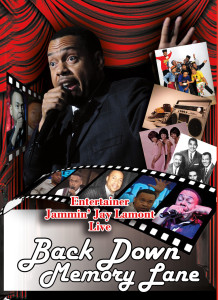 Those who have never seen Entertainer Jay Lamont before or don’t remember his name are in for a rare treat. During this performance, he touches on the past when music artists like Ronald Isley, Patti LaBelle, Marvin Gaye, Anita Baker, Al Green and more touched the soul. As an talented impressionist, he performs some of the greatest entertainers in the business both from the past and today – entertainers like Prince, Michael Jackson, Luther Vandross and even a special guest impression of President Barack Obama.

This parody DVD is an amazing ride from start to finish. “Entertainer Jay Lamont live Back Down Memory Lane” is hilarious and will take viewers back to the days when music had meaning and comedy was truly funny.

About the Ultimate Entertainer

What do you get when you mix clean Comedy, Impersonation and Music into one package? You get the Ultimate Entertainer Jammin Jay Lamont. Jay was born in Oklahoma City OK., where as child he would make all kinds of sounds to make people laugh and cheer. When he left Oklahoma he moved to Houston TX., where he worked as a Radio Personality for several years until one day he realized his calling was to perform live on stage. Finally Jay packed up the car and moved to Los Angeles CA., where he currently resides today. Since moving to Los Angeles Jay has performed on Disney Cruise Lines, BET’s “Comic View”, Comedy Central, Showtime At The Apollo, Tom Joyner Family Reunion, Blue World Travel “Festival At Sea”, “Capital Jazz Super Cruise”, Russell Simmon’s “Def Comedy Jam”, Byron Allens “Comic “Unleashed”, Jamie Foxx presents “Laffapalooza” and Martin Lawrence’s “1st Amendment” and, casino stages all around the country. Jay Lamont is a multi-talented entertainer who has performed with such greats recording artist as the late Luther Vandross and Roger Troutman. Jay has also performed with The Gap Band, The O’Jays, Anita Baker, Ledisi, MAZE featuring Frankie Beverly, D.L. Hughley, Tommy Davidson, Cedric the Entertainer, Mike Epps, Jamie Foxx, Charlie Wilson, and many more.

Although Jammin Jay truly enjoys performing with some of the greatest names in show business he decided to create his own one man showcase entitled “It’s Real Not Memorex”. This show has amazed audiences of all ages and demographics from start to finish. Truly amazing he receives standing ovations night after night no matter where he performs. So unbelievable audiences across the country leave his show wondering was that really him or was it a recording? What make his show so unique is every Sounds and Impressions heard are being performed by Entertainer Jay Lamont without any sound effect machines or DJ assistance. Jay’s secret recipe to his success is his ability to perform in front of any type of audience by adapting his show to the audience at hand. His stage show is perfect for Las Vegas Showcases, Military Tours, Churches, Corporate Events, Comedy Theaters, and Music Concerts across the country and overseas.