Did you ever meet someone so slanderously charming, sarcastically inspiring, and arrogantly captivating? Well, Loretta Christiansenson is your girl! If she’s not spraying away the gays then she’s innocently contriving ways in which to annoy the planet in the most numerous way humanly possible. 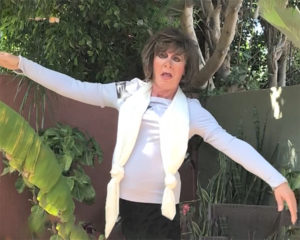 Her innocence is merely a ploy to disguise her tactlessness, and her smile demands attention that she thrives on. With all these diverse qualities in one person there’s no doubt you have to at least find her entertaining…..Yet the whole world loves her….even the gays.

I spoke with artist/designer/tv show host Garyk Lee about his infamous youtube sensation alter ego because after-all he knows her best!

How did you ever think of creating the Loretta character?

Well it wasn’t too difficult growing up in Oklahoma…Ha! She is sort of a combination of several ladies that I experienced their personalities, all rolled into one…Living in a bubble…more concerned about what the neighbors would think than actually enjoying life…Her name is Christiansenson with an extra Son…Thrown in so even she; Loretta, has difficulty pronouncing her last name.

What does she represent to you, and how did she get to be so funny?

Well a combination of a southern accent and a holier than thou attitude combined with bigotry, heavy make-up and over the top facial expressions…one can’t help but to perceive her as funny…I love to make light of situations and find humor in misunderstanding of the meanings of words or misinterpretation…her cameraman Soren, is constantly correcting her…I didn’t want her to look like a drag queen…more like a Southern Lady that loves to over indulge in glamour.

Talk about the other characters on your fabulous show Garyk Lee Style TV please!

I bring my friends that are known in the film and TV Industry to make guest appearances and I’m very appreciative of them…my animated character Fashiona, who’s voice is that of Chris Bennett, Grammy nominated Jazz singer will be on more and more. She was originally my muse in my first YouTube show, Garyk Lee Retro Respective. During episode 5, Fashiona asked me if she could come to Earth and be my assistant which sets up many fun future scenarios…I have also created a Character, Natasha who is my seamstress with pride as she is 3rd Generation from a Russian and Lebanese dress making family…She is a trip…played by Sherree McEachran, along time friend and actual seamstress that will do the construction with me on our fashion related episodes…You can see her now on Episode 7 of Garyk Lee Style TV. 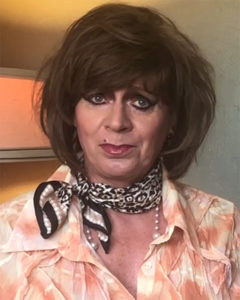 Art and Fashion Casserole! – Part I

Garyk arrives at Bobbie Eakes and doesn’t realize that Fashiona hitched a ride.

Bobbie is not sure of Garyk’s choice of dressmaker after Loretta Christensenson appears.

Who are your greatest influences?

Lucille Ball for sure! Carol Burnett and all her character actors on her show, Mama’s Family…Dell Shore’s Sordid Lives…Which takes place in Tyler Texas and is hysterical.

Well, I believe at some point Loretta may have an Epiphany and learn why she is so offensive to those with a more liberal mind set…But not till after she offends a few more…Ha!…She may also find Love with a Scottish Gentleman caller…I’m constantly jotting down ideas on paper towels, envelopes…whatever is near me before I forget them…All the while, It is a How To Show so I am constantly balancing the humor with a more serious design venue. 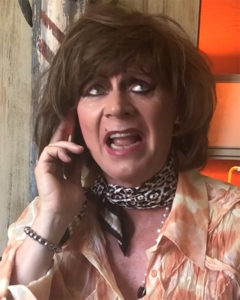 Loretta interviews Sean Kanan and Jill Liberman…Co-Authors of Success Factor X, And in her usual fashion… screws a few things up!

The official website for Garyk Lee may be found at www.garyklee.com

For interviews with Garyk Lee or Loretta Christiansenson contact worldstarpublicrelations@gmail.com

The term “three chords and the truth” is one you get to throw out a lot when you review music, as it relates to a number of different genres. First used to describe the stripped-down, […]