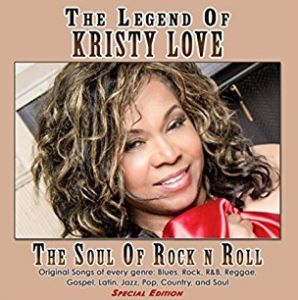 A natural outgrowth of Kristy Brooks’ stage musical The Legend of Kristy Love in the Soul of Rock ‘n’ Roll is the accompanying soundtrack album The Soul of Rock ‘n’ Roll which, as its title implies, aims to do nothing less than survey the vast expanse of stylistic variations rock music is capable of while remaining a focused, coherent effort. Her attempt is uniformly successful. Brooks is, obviously, a seasoned vocalist, writer, and performer who only abides by personal restrictions, never any arbitrary ideas of what sort of role her talents should slot into. She’s just as convincing with sultry, slow evolving R&B as she is with its funkafied counterparts and even tackles straight up radio rock with a total command over the material. Her earlier recordings with the RCA label, a stint with The Platters, and countless live appearances over the years have sharpened her skills into something capable of laying an audience open. She does so on The Soul of Rock ‘n’ Roll with immense results.

“Keep On Believing-Believe In Yourself” sends the album into the stratosphere from the first. This is a rousing reminder to empower yourself through faith in your own uniqueness and gifts fate has seen to bless you with filtered through an invigorating musical arrangement. The majority of The Soul of Rock n Roll deals with R&B and soul in various permutations, but the sound on this song mixes R&B with gospel stylings to particularly memorable effect. “Good To See You” glows with genuine warmth and has some gently sparkling passages thanks to the contributions from synth and other keyboards raining down throughout the track. Brooks shows great sensitivity with her vocal. “Love Is On My Mind” gives listeners a thoroughly sensual, yet classy, musical and lyrical experience with Brooks giving a lightly theatrical and intensely atmospheric singing performance.

“Get Smooth” has a nice, ambling dance groove and a strong reliance on recurring synth figures. The song balances a modern sound with some basic fundamentals that go back in the genre thirty years or more and there’s some first class backing vocals joining Brooks throughout the song. “Rainbow of Love” has a light reggae bounce without ever trying to slavishly imitate the musical style and Brooks only slightly twists her voice to attempt framing her phrasing in a manner complementary to the style. “Time for Love” is reminiscent of the earlier track “Good to Meet You” in the ballad-esque way it slowly unfolds for listeners and focus on lush melodic structures. “Find a Good Woman” is a great R&B mash up with some stronger than normal blues influence and an appropriately strong vocal performance from Brooks. The finale “Dream Your Dreams” forms a natural bookend with the album’s first song as it is another song aiming to stir the spirit and it’s impossible to quarrel with its positive message. It’s a great way to wrap up this album because it emphasizes a critical component of Brooks’ presentation – she doesn’t fall for the easy despair affecting so many performers in popular music and, instead, makes deeply personal music that shows us a better way.