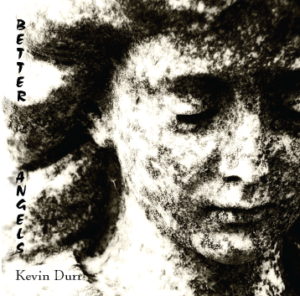 Though his music is often very entertaining and deliberately so, Kevin Durr’s Better Angels clearly has higher aims. It’s the latest album from a Chicago singer/songwriter who, over the last fifteen years, has built a formidable discography and established himself as one of the foremost purveyors of the style working the Windy City club circuit and beyond. He has a truly different lyrical spin than many of his peers, neither purist nor imitative, and has tackles the album’s twelve songs with an understated sense of daring and a confidence level that makes each of these tracks sound like emphatic statements from the heart. Despite the indie nature of the recording, Better Angels’ production values help convey the material with clarity and nuance while Durr also ensures there’s a satisfying amount of variety spread out over Better Angels’ dozen songs. It’s one of the more thoughtful and musically excellent recordings in this vein that I’ve heard in some time.

“I’m Not Sleeping Anymore” kicks Better Angels off with a near anthem that sounds the call for consciousness and engaging the world in an undeniably passionate way. The union of Durr’s voice with a backing female voice makes for an effective pairing on each of the album’s twelve tracks and a big reason why is they never fret bring their voices into lockstep accord with one another. Their harmonies, when they hit, are very satisfying, but they do a lot of playing off one another, unconcerned with seamlessness. “The Writing on the Wall” is one of the album’s more carefully wrought, patient numbers and the obvious care taken with both composition and performance pays off with a particularly resonant number that vividly conveys intelligence and mood alike. “To Believe in Love Again” is one of the album’s more traditional and direct numbers, but it never errs too much on the side of obviousness and has enough melodic complexity to mitigate its relatively staid guitar work. “Beyond and Above” tests the limits of Durr’s musical ambition unlike any other song on the release and the two distinct section comprising the song sound natural rather than like he attempted to mesh two half finished songs with mixed or terrible results.

“In the Now” is, like the earlier “The Writing on the Wall”, one of the album’s more deliberate and laid out pieces, but the strong sense of structure defining its sound never leaves it sounding cold or flat. “Joy” is similar in this respect, but the writing for this song reaches another level and rates among the best lyrical moments on Better Angels. There’s definitely a personal streak coloring the second to last song “Didn’t We?” but, like Durr’s best songs, his sense of individual and collective achievement is always informed by a pragmatic recognition of the obstacles his subject(s) overcame to realize their dreams and inner mission. This is music emboldened by inexhaustible passions, guided by skill, and delivered with impressive professional polish. Kevin Durr’s Better Angels will appeal to anyone who loves singer/songwriter material with an acoustic edge but, likewise, anyone who appreciates genuine music with an appealing commercial side will flock to these songs.