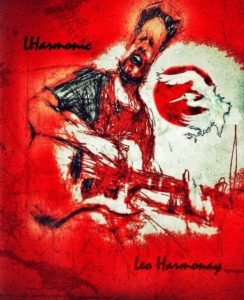 Managing high rise apartments by day and making memorable music in his personal time has proven to be no distraction to Leo Harmonay’s talents. His third studio offering LHarmonic is a six song EP with a live performance included for good measure that engages with its audience from the first and never becomes too artsy for its own good. This is despite Harmonay’s established reputation as one of the best, poetic lyricists working in the singer/songwriter genre today, but his artistry is such that even a casual listener will find this to be a collection you can connect to without expending much effort. Despite the ease of digesting Harmonay’s material, it’s never a lightweight effort. His songwriting acumen comes through without ever falling back on overwrought moments. His relaxed talents find expression in the way they do because Harmonay knows exactly what he wants his songwriting to do and has accumulated the experience to pull it off.

There’s no song on LHarmonic that conveys that easy going, loose limbed confidence more than the opener “Shine On You”. It’s a song full of immense warmth without ever overreaching and ending up with something too stagy or clichéd. The simplified language doesn’t come by sacrificing meaning and emotional depth, but it’s clear they are written to lock in with the arrangement and they do very well. “Deep Ocean Blue” doesn’t have quite the same Americana feel of the opener and operates in more solidly singer/songwriter tradition, but the electric guitar playing is even more effective here while still maintaining a less than overwhelming presence in the mix. Harmonay’s EP isn’t ever self-consciously commercial, but the opening two songs are, far and away, the cuts likely exerting the most broad-based appeal. “Heart Alone” doesn’t share the same commercial appeal thanks to its tangibly darker aura and a less A-Z arrangement that relies on atmosphere and the connection between the singer and his audience. Listeners will be grateful, however, that he never relies on typical language to get such a song over and, instead, writes about common subjects with a distinctly individual touch.

“Glorious Decline” is another of the EP’s high points and definitely invokes atmospherics in more pronounced way than we’ve heard on the earlier tunes. Once again, however, it never becomes an oppressive listen despite its much more dire mood and the intelligence and melodic strengths shine through. “Rainbow Sounds” provides listeners with a much different sound than the earlier tunes but the addition of strong electronic elements to the mix never takes the EP too far out of its comfort zone. LHarmonic closes out with a return to the EP’s opener, much more musically developed this time, and closes the circle in a neat and satisfying way. The bonus song doesn’t feel extraneous to the collection; it could have worked without the song, but getting a listen to how these songs sound in a live setting is a nice treat that closes the release on an affirmative note. It’s Leo Harmonay’s best release yet.