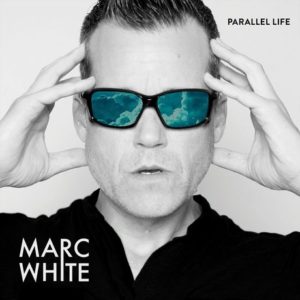 Parallel Life, the title of singer/songwriter Marc White’s debut album, implies a reference to maintaining his love of music alongside a career in sales. White has built a life for himself that has allowed him to continue clamoring after his musical aspirations while still maintaining an acceptable standard of living, yet the life of a salesman has never taken precedence in White’s heart. You can hear that in every second of the track “Rise” and producer Jeff Grenier has framed his lyrics, singing, and musical arrangement in an ideal fashion capable of gripping the audience without any pretense. “Rise” totally comes off like a performance from someone who has been pursuing his craft for many, many years and any anxiety he felt taking on the work of a debut album instantly melts away with the album’s first single “Rise”. It’s an impressive work in every respect.

“Rise” will grip any listener and honestly achieves its effects. There’s no doubt that there’s some light similarities to AOR anthems, but White never pushes those elements too hard and the song thankfully avoids falling too far into formula. White has a distinctive voice as both a singer and songwriter, but musically as well – the synth sheen opening the album improbably transitions into a guitar based attack and there is equal parts a singer/songwriter level of substance married to a commercialized sound sure to enchant many. The electric guitar work is important and contains a great deal of urgency, but one of the best elements of the song is how it has a largely live sound immediately connecting with the listener. It never overstays its welcome and has a tight focus that resists sideshows or any self-indulgence. Marc White’s “Rise” involves listeners from the first and pulses with commitment every second of its running time.

Much of the performance’s urgency comes from Marc White’s vocal and his fully realized lyric. A great lyric is further elevated by an even greater singer and this is true with “Rise” as the apparent passion he brings to the singing makes the song’s words come off like performed poetry that’s nonetheless quite accessible. He has a strong sense of the value of percussive words in a commercial rock song while still communicating the song’s subject through both general and specific imagery. Much like the other elements of this track, there’s a level of polish to both his writing and vocal presentation that’s seems far beyond the purview of debuting artists, but it’s further testament to how Marc White never gave up on making his musical dreams come true. “Rise” comes across as an intensely personal musical experience that, nonetheless, connects with listeners from the first and brings them deep into its web. As a first taste from White’s album Parallel Life, “Rise” promises that Marc White’s first effort is something much different and better than your standard AOR/singer-songwriter fare.