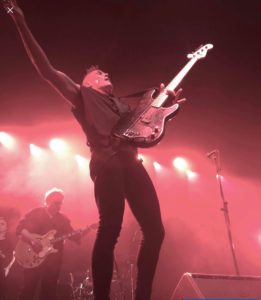 When you stand in the middle of a packed crowd already fluffed by a host of fantastic dynamic support acts,  then the headline act comes on and you immediately feel exhilarated, that viceral power, and all you can say, wide eyed and completely immersed , is WOW!! … you know you’re witnessing something special… VERY special.

Watching one Mr John Robb and his band the Membranes remind me and my musical sensibilities what true power, honesty, tradition, musical dynamism and the love of British Alternative Rock means to us. The membranes are important. John Robb is important, VERY important. He’s continuing an important tradition that’s vital to us Brits and the wider world… He’s a force of nature, relentless and should be lauded for the dedication to his art.   The front man was animated, on point and the lightening rod conducting not only the incredible energy the packed audience directed at the stage, but also the beauty of the sublime choral sections delivered by an onstage choir… Yes.. Punk/ Alternative Rock with an onstage Choir and it melded and worked perfectly creating a balance of light & shade that kept my proverbial sunglasses on the move throughout the event.

Instead of jumping around like much of the crowd, i found letting the whole experience transport me uninterrupted, letting the experience happen like your best ever 90’s Ecstasy trip was the way to approach it so I stood mesmerised on Saturday evening. People trying to talk to me , interrupt my buzz were given short shrift as I WANTED this. I wanted to experience every single second, every note from the first power chord to final crescendo. And the Membranes delivered. They delivered good!.

At times the Tidal Wave of a set list threatened to drag us under with the sheer power and energy, it was relentless, threatening and yet a beautiful sight, so good to experience. However the choral interjections gave us all pause for breath. The crowd of course prevailed, rode the waves and surfed them track after track until the final phrase with a Mr Robb’s sweating breathless vocal and his Fender Bass, which he wielded at times as a weapon of destruction and others a wand of incantation held high in triumph. A triumph he and the band truly deserved. Tracks like The Universe Explodes Into a Billion Photons Of Pure White Light, A Strange Perfume, Do The Supernova, Mother Ocean/Father Time, In The Graveyard, The 21stCentury Is Killing Me, and Myths and Legends were delivered seamlessly and with the delicacy of a choral reinvention for many of the tracks, the power of Black Is The Colour left the audience myself included, literally dripping with enthusiasm and completely sated.

I’m actually getting a buzz recalling the gig and writing this piece. With a broad smile on my face  if there’s any footnote to mention, it’s that THIS is what music is about. Its visceral, beautiful and very, very important and its only the likes of The Membranes and their excellent support acts The Cravats , Lovely Eggs,  Evil Blizzard, One Sided Horse, Sink Yah Teeth and Lines who keep this Punk/ alternative genre alive.

Something of a contradiction, John Robb delivers onstage brutal power and creativity and offstage is a real gent, kind and infinitely humble. I don’t think Mr Robb quite knows how important or how good he really is … so ..  tell him, appreciate what the Membranes do and do yourself a favour, support them, listen to them, see them live and ‘Ride the

Immersed amongst the depths of the boy band world of “No Authority”, the lead singer then known as Ricky G began his music career.  Immediately signed to Madonna’s record label, the band toured with […]

Olga Perry: “A Utopia of Fantasy in the World of Art” by Eileen Shapiro

Surrealistic, fantasy, artist Olga Perry has opened up an electrifying, orgasmic world of self-creation in the world of art. A powerfully imaginative painter, realistic and relevant composer of sculpture, music video extraordinaire, classical keyboardist and […]