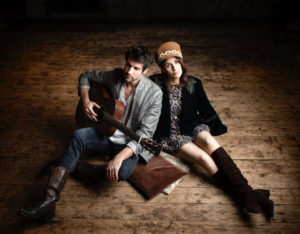 Releasing their debut record, The Luck comprised of siblings Max and Esmay’s latest material in the shape of album ‘Ready To Run’ showcases a collection of tracks from emotional country ballads to optimistic Americana anthems.

Having made a name for themselves at Home in London and across the sea in the States, The Luck’s dreamy music career hasn’t been easy. Having spent the best part of 8 years since the duos establishment in 2011 winning overs fans and developing their own instantly recognisable artistry. Now that the building blocks have been put in place, The Luck are soaring to success especially with their debut ‘Ready To Run’.

Recorded out in LA ‘Ready To Run’ takes influences from Americana greats including Tom Petty and The Eagles and merges this respected muscaility with The Lucks very own sound. For example, opening title track ‘Ready To Run’ catchy pop lyrics, powerful vocals and heart-warming instrumentals make this track have al the essential components needed to produce a track destined to be put on repeat on peoples playlists 24/7.

Moving on, and more melancholic moment come into play. With tracks ‘If This Is Love’ and ‘Place In The Sun’ bringing a stripped back sound to follow up the otherwise anthemic ‘Ready To Run’ provide this album with musical depth, all whilst reflecting the diversity this duo have to be able to switch seamlessly between upbeat smashed and stripped back ballads.

The album also features the courageous ‘Lionheart’ and nostalgic ‘Tomorrow Turned To Yesterday’, yet more additions that showcase the lyrical flexibility and musical versatility of this pairing of siblings throughout the entirety of their debut record.

With ‘Ready To Run’ now available in its entirety to the world, its onwards and upwards for The Luck, with the duo set to appear across a selection of dates throughout the festival season. You can catch The Luck performing at Foundtown Festival, Pub In The Park and Longroad Festival in the next coming week as well as listening to their incredible first full length album ‘Ready To Run’ available now.

Watch the official video to the title track from our debut album. If you pop your email in the box, we’ll keep you updated straight to your inbox on the latest on-goings of our journey and exclusives before everyone else (you’re free to unsubscribe any time).