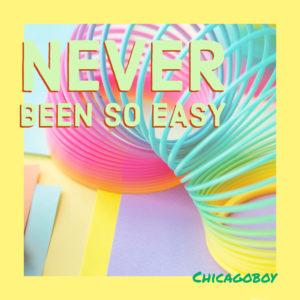 CHICAGOBOY prefers being a mysterious Producer so that you can focus more on his Progressive and Techno melodies. Recently, he shared some snippets of his upcoming album ‘Never Been So Easy’ via YouTube. Nevertheless, you can stream in full the project’s namesake track on ReverbNation. These previews of what’s to come with his new material caught my attention because his 90s influence comes in full force.

For your listening pleasure, the album’s first single “Never Been So Easy” brings a combination of warm sounds, high-pitched synths, melodic hooks, and an electrified Techno sound. Moreover, I believe I am right in saying that it’s a modern reimagining of old-school rave classics. With this in mind, the upcoming album will have a nostalgic generation more than happy to listen to it. Stay tuned for its release date on March 1st, 2019, or pre-order the album via iTunes as soon as possible.

The anonymous Composer and Songwriter is not a newcomer in the music industry, quite frankly, I have my own suspicious he’s actually a legend. First of all, he started his career path in 1989 releasing Eurodance singles. Through years, he also became interested in other genres like Hip-Hop, Rap, House, Techno, and even Trance. As a result, his long journey makes him a great connoisseur of the dance scene. So, it’s not easy to discover his real identity yet. Surely, you might end up wondering who might be behind this great project.

Never Been so Easy | Chicagoboy

Never Been so Easy by Chicagoboy, House music from Chicago, IL on ReverbNation

Pre-order this album now for free on Spotify:
add-it.feiyr.com/Chicagoboy/Never%20Been%20so%20Easy

This is Chicagoboy. The essential tracks, all in one playlist.