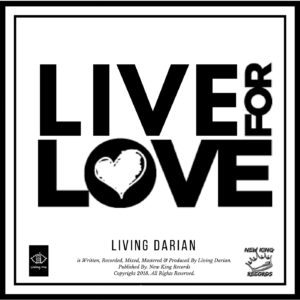 “The dynamic16 track full-length album, the sophomore release, by this incredibly talented artist is written with a powerful theme of uplifting-empowerment. It examines the human experience with the common goal being the betterment of people and the lives they lead”.

July 5, 2019 [Cincinnati, OH] Eleven years after the successful release of his debut album “Whatever it Takes” in 2008, Living Darian upped his game with his new record “Live for Love.” The songs have become more potent over time as his confidence and conviction have grown to enormous proportions.

The most popular song on the disc is “One Song” (We Are One) a call to social action. The song takes a hard look at the human experience and what it means to be “us.” There are additional songs that are very popular as well, “These Things” which is wildly popular at live events and “Tonight it goes Down has just shy of 100k streams on Spotify. The album is already in all online stores and streaming on iHeart and Pandora radio. Physical copies are available in stores in Cincinnati, at Living Darian’s shows and on his website.

Living Darian is from Cincinnati, Ohio and started in music at age 10 – learning drums. He began recording at age14 and had his recording studio at 16 years of age. A multi-instrumentalist, he now plays guitar, keys, raps, and sings. His musical styles and genres include but are not limited to Pop and Rap. He has collaborated and toured with many successful artists, the likes of Wu Tang’s Born Devine, as the closing act for Ne-Yo in Richmond Virginia, and the Born Devine “No Secrets” Tour.

We inquired with Darian as to what inspires him to get on stage. He replied tenderly, “What gets me on stage, no matter how I feel, has always been my “Ministry”– or more appropriately my “Message” since I’m not a secular artist. I know this is what I’m supposed to do. It is my souls’ work. Right before I walk on stage, I remind myself that this is what I was born to do”.

We asked Living Darian what his music and songwriting process is all about. He tells us: “I believe the magic of music is the way it makes you feel. So, I try to only “feel” the music with very little thought. For me, the goal is all emotion. My purpose has already considered thinking and takes care of any details. Whole sections of songs hit me at once. I usually have the song mapped out before I begin to write or put it all together”.

“The new album is simply amazing” states music industry promoter and publicist Ken Cavalier of the Allure Media Entertainment Group ™, “we have extremely high expectations for it and have little doubt that it will skyrocket on the charts.” Live for Love is already gaining popularity amongst the music media critics and is already receiving stellar reviews. tinyurl.com/yx9ujaqr

Living Darian is currently playing regionally at community events, seminars & positive events while booking his empowering “Live For Love” Tour. He also hopes to join the final leg of the “Extreme Tour”. For more information on this fantastic artist, visit his official website at www.livingdarian.com

Living Darian’s new album can be streamed or purchased at the following digital distribution portals:

Create & stream a free custom radio station based on the album Live For Love by Living Darian on iHeartRadio!

Live For Love, an album by Living Darian on Spotify