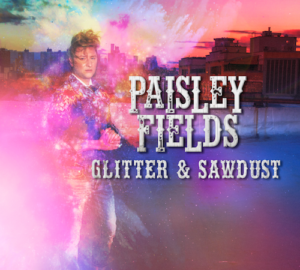 Country Superstar Paisley Fields is having his highly anticipated “Glitter & Sawdust” album release party  on Thursday April 12th, 2018 at C’mon Everybody in Brooklyn, New York from 8-11 pm ET with Karen and the Sorrows and Mylo.

Paisley Fields are a queer country band, unapologetic about pushing boundaries and seeking inspiration in the unexpected. Though lead singer James Wilson is inspired by country musicians like Dolly Parton & Gram Parsons, he wanted Paisley Fields’ music to reflect the modern world.

The Paisley Fields will be playing great new music including their single “The Door”  which is about loving and supporting friends and loving yourself, and is the first single off the soon to be released new album “Glitter & Sawdust”.

Get your copy of “The Door” by Paisley Fields here: thepaisleyfields.bandcamp.com

Check out the new music video for the first single  “The Door” by Paisley Fields here:

Support great music at the Paisley Fields “Glitter & Sawdust” album release party with Karen and the Sorrows and Mylo at C’mon Everybody located at  325 Franklin Avenue, Brooklyn, New York, 11238.

Jasson Finney: “The Adventures of Captain Pump” by Eileen Shapiro

Author, actor, CBS fitness expert Jasson Finney has created the first fitness Superhero within his new children’s book release “The Adventure of Captain Pump”. The book is creating a buzz in schools and reviews have […]