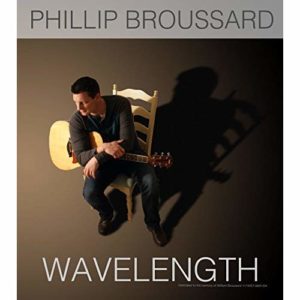 For some people, summer is all about hitting a sunny beach or blazing up a barbeque with some close friends and a hot day, but for those of us who live and breathe music, nothing can ever beat a fresh summer jam that inspires us, gets us dancing, makes us think or just soundtracks the little moments that make life special and grand. Phillip Broussard isn’t a DJ or a rapper, and he isn’t the frontman of a new rock outfit, but he’s leaving his mark on the summer sound with Wavelength, a five song extended play released last year that is just beginning to find its footing in college radio and indie scenes across the country. Broussard is a Seattle singer/songwriter, but don’t assume that he’s a coffee shop anti-hero. His music combines country, pop and sentimental folk to create mellow vibes perfect for introspective fodder and appreciating a freewheeling, boundless spirit that made roots music so successful in the late 1960s.

In the song “All Over Again,” Broussard treats us to some of his best poetry to date and eloquently summarizes the cycle of love with a poise and swagger rarely found in his genre of music anymore. Similarly, the moving “Best Friend” leaves a lingering sense of justice and regretful hindsight that is emotionally charged and displays a maturity not typically associated with a man of such young age. Using his colorful textures and bold acoustic harmonies though, Broussard gets us lost in his enigmatic storytelling and opulent melodies and still allows us to find where we stand for ourselves somewhere along the bewildered path. Sure, it is an ambitious premise for an extended play, but from where I sit, he’s just good enough to get away with it.

It’s pretty hard to find music that isn’t hung up on its own ego these days. Everything that’s dominating the pop charts gives us the idea that big egos, and all of the frivolousness and illogicality that come with them, are the only thing that sell when that simply just isn’t the case. The pop establishment pushes this stuff because it’s cheap and easy to produce and when set to a catchy enough beat can be marketed as “empowering,” which is something that people desperately go after in this age of self-loathing and collective, post-technological revolution depression. But even listeners with the most generic and questionable of tastes have to admit that this current climate for music is getting awfully stale, and the cries for new blood are becoming deafening and universal. That’s where Phillip Broussard enters. We don’t need more artists who abuse self-conscious prose to market disingenuous love songs and pseudo political anthems. What we do need is artists like Broussard, who put everything out there and do it without lyrical, musical or social self-admiring and ego stroking. Anyone who’s hip to this kind of direction would be smart to give Wavelength a listen when possible, and artists of his peer group in every genre and scene should consider taking a page from his book when it comes to professionalism.