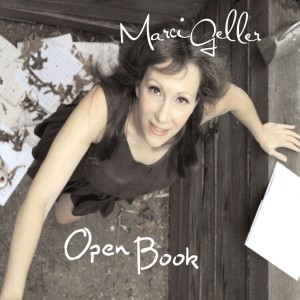 The 12 tracks on Open Book – a frothy mix of irony, humor and whimsical honesty, weaving beautiful, intimate verses with infectious choruses that invite listeners to find their own voice in them — were penned by Geller after she made the decision last year to leave the trio she founded and set out to rediscover her musical voice as a solo artist. Although leaving the group was scary at first, she had faith that if she made the time and space, the songs would follow.

“Almost immediately, the songs started flowing so fast that it was hard to keep up with them,” Geller recalls. Needing an outlet, she dove into doing her first solo show in March. To her surprise, she drew an SRO crowd and, for the first time in her career, experienced stage fright. Her body shaking, and with her heart racing so loud she could swear the audience would hear it, Geller almost didn’t get through her performance and, for but a moment, she thought of pursuing something “normal” with her life.

Realizing that not making music was impossible for her, Geller attended an open mic later that week hosted by Carolann Solebello, formerly of the trio Red Molly. She recalls that Solebello, who sometime earlier had also opted to leave a popular trio that she had co-founded, told her: “It will take six months before you get your legs back, and you will. You’ve got songs in you that people need to hear, that I want to hear.” “She was so strong, confident and kind,” says Geller, who vowed to keep playing until her heart was keeping time with the music again. Within a few months, she was singing and playing with a conviction like never before — and then there were all these new songs, prompting the recording of a new solo CD.

With DiMauro at the helm as engineer, drummer Brain Dunne (Hall & Oates, Randy Brecker) and bassist Jack Knight (Funk Filharmonic, Stephen Stills) laid down the foundation that commenced the journey of the recording of the Fall 2012 release for the New York-based Geller, whose passion and tenacity have helped her forge a distinct niche in the independent music arena.. Other artists appearing on the CD, which was fully funded by fans on PledgeMusic.com, include David Glaser on EBow and guitar, Keyboard wiz Oli Rockberger, Jonathan Preddice (Miles to Dayton) on cello, and back-up vocals by John Tabacco, Honor Finnegan and Donna Bach-Heitner. In addition, a choir of voices was produced for “Jack Sang On,” which Geller wrote in tribute to the late folksinger-songwriter Jack Hardy.

“With intelligent lyrics, captivating melodies and inspired vocal pairings with James Maddock and Vance Gilbert, Marci Geller’s Open Book is a great listen from the first song to the last,” says Alan Marzelli, curator of the Words & Music concert series at the Ossining (NY) Public Library. Noted singer-songwriter Lori Lieberman calls Open Book “a lovely collection of songs that reflect the artist’s inner strength and positivity. Songs/music/arrangements/vocals – just beautiful.” Calling Open Book “a well-crafted musical treat for the soul,” singer-songwriter Reggie Harris says: “Marci’s crisp, warm vocals ride the wave of this smartly articulate production creating a wondrous space for the lyrics and melodies to find their way into the heart.” Vance Gilbert refers to Geller as a “dulcet-voiced angel,” while David Buskin of the Buskin & Batteau Trio calls her “one of the finest singer-songwriters we’ve come across.”

Named an “Editor’s Choice” in 2010 as one of its favorite songwriters of the last decade by Independent Songwriter Magazine, Geller was selected earlier this year to showcase at both the annual Singer Songwriter Cape May conference and the 11th Annual Songwriters Showcase hosted by the New York Sheet Music Society, an organization that seeks to preserve the Great American Songbook. She’s performed on “Live with Regis,” “Good Day NY” and “Fox Morning Show,” and her music can be heard in soundtracks on MTV, VH-1, PBS, ABC Family, A&E, Discovery channel, USA Network and others. Geller also toured for two years as the support act and back-up vocalist for Ritchie Blackmore’s band, Blackmore’s Night. Her latest release, Open Book, is currently garnering airplay on radio stations across the country