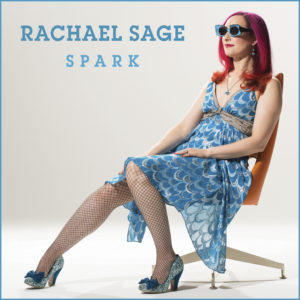 Rachael Sage, skilled vocalist and Award Winning NYC based recording artist, returns to the UK once more with a new album that so perfectly demonstrates her expert musicianship and versatility as an artist…

Intertwining infectiously catchy melodies with beautifully honest lyricism, Rachael’s new single ‘Spark’ is everything that we have come to expect from an artist whose creative talent knows no bounds. ‘Spark’ is set to be released on the 6th of July, with the remainder of her 13th Album ‘Myopia’ premiering this fall.

‘I don’t know your secrets // but I feel you like a spark’, sings Rachael in her characteristically velvety tone. It is a song about the intimacy of a shared experience with a total stranger. It is about the magical moment when a relationship is in its infancy, before anything can go wrong and you can just revel in the lack of familiarity. It is a beautiful depiction of an experience of excitement and exhilaration that is universally felt.

The track starts with a beautiful and brief piano hook before Rachael’s voice joins the mix. With vocals as delicate as they are powerful, she truly is a musical maverick. The track is then taken up a notch with the inclusion of a dynamic and vibrant string section, and a subtle but robust drum beat that gives the track a real pulse.

Given her position as a hypnotic vocalist and talented multi-instrumentalist, it is perhaps not surprising that Rachael has become one of the highest acclaimed touring artists in Independent music, with her calendar always being packed full of global performances.

Rachael has shared the stage with artists such as Judy Collins, Shawn Colvin, and Ani DiFranco – to name but a few. Last Spring also saw Rachael take to the stage in a UK tour with synth-pop icon Howard Jones. Rachael’s beautifully distinctive sound has also landed her an invite to perform at the prestigious Edinburgh Fringe Festival, as well as leading her to win awards such as The John Lennon Songwriting Contest and several Independent Music Awards. She has also had 22 of her tracks featured on hit TV show ‘Dance Moms’, where they accompanied Sia’s breakout video star Maddie Ziegler and other stars of the show.

‘Myopia’ is Rachael’s 13th Album Release since the founding of her own record label MPress Records two decades ago. Each respective album has featured Rachael’s distinctively unique sound, and yet when listening to her catalogue chronologically you can see her evolution as an artist; she is a musician who exceeds expectations regardless of how high the bar was set before. Her mesmerizing vocals give listeners no choice but to be enthralled, whilst her lyrics documenting those universal human experiences of love, loss, and life are relatable to everyone.

To Rachael, music is like a canvas on which the experiences of life can painted. As an artist she is honest, and truthful, and truly innovative. ‘Spark’ is set to be released on July 6th, with the release of her complete album ‘Myopia’ coming this fall.

Come Join Rachael at SXSW 2019 Rachael will be performing at SXSW this Saturday, March 16 @ 4:30pm. She’ll be playing a special event sponsored by ADIM, accompanied by violinist Kelly Halloran. The showcase is FREE, and we would love to see you there! Official invite here .