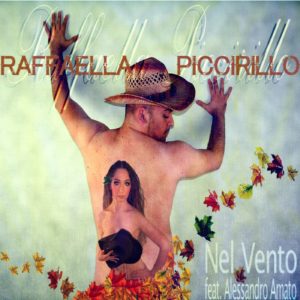 RAFFAELLA PICCIRILLO: the Country Music duet NEL VENTO official video IS OUT!
After the launch of the new music project by Raffaella Piccirillo with the Virtual Puzzle acoustic CD, the new single Nel Vento is out. Passion, torment, obsession … these are the emotions that are protagonists. Nel Vento (In the Wind) understood as continuous perception “in the air” of the presence of the loved one. A journey on multiple time lines between memories, fears, desire and sensations. A song born in an acoustic way but now proposed in a more up-to-date and charming version, available in digital download and on all streaming platforms, together with the videoclip published on the YouTube channel of the Cremonese singer-songwriter. Song already previously defined as the most country song of the entire music album with the participation of Alessandro Amato in the male voice, with the particularity of lyrics sung both in English and in Italian honoring and reconfirming a production made in Italy-Overseas with the GoPla SoundLab Studios (USA and Mexico). Another attempt already discreetly successful (as stated in previous reviews) to bring in Italy folk music typically US in a mix at times sexy and veiled erotic, sometimes indie and slightly daring. Continue the journey of Raffaella and as the videoclip tells … music on the road! Link to the video: youtu.be/hTmL-qFB-wk
Credits: Video subject: Raffaella Piccirillo, Alessandro Amato Direction and editing video: Studio RP Lyrics and Music: Raffaella Piccirillo Produced: Studio RP, GoPla SoundLab Studios Mixing & Mastering: Arturo Gomez Plasencia Biography: Raffaella Piccirillo is an italian singer-songwriter born and raised in Cremona, with multiple contaminations. Inevitably influenced by typically US country folk styles, his music often blends with a more European indie rock. This artist is also inspired by the numerous collaborations that see her as a protagonist together with other independent artists from around the world, bringing her to experiment her versatile voice on more musical genres. Contacts:
Facebook: www.facebook.com/RaffaellaPiccirilloOfficial/