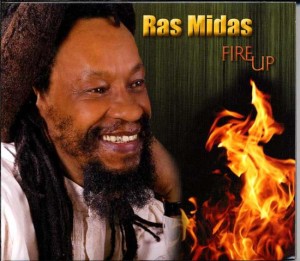 Jacksonville Beach, Fla. – March 23, 2013 – Jamaican recording and performing artist Ras Midas has launched his official Facebook Page. To link to Ras Midas’s new Facebook page, visit his Web site, www.RasMidas.com, and follow the Facebook link at the top right of each page. The specific URL for the official page is www.facebook.com/#!/pages/Ras-Midas/519704684730140?fref=ts.

Ras Midas is an established singer, songwriter, performing and recording artist, and composer and producer; he has produced dynamic Reggae music since 1974. At the age of 16, Ras Midas began recording unique and innovative songs for the famous Jamaican producer Harry Johnson at Harry J. Recording Studio, Kingston, Jamaica, with Reggae’s finest musicians and vocalists.

Ras Midas, a true Rastaman, is an original. With a distinctive style and a silky smooth voice, he sings with the mission of a musical revolutionary; he was dubbed “The Musical Prophet” in Europe early in his career. Ras Midas consistently delivers dynamic, high energy performances, with positive and pensive lyrics floating over steady, solid roots rock Reggae music.

Ras Midas’s first international hit was the single release “Kude-A-Bamba,” recorded in English and Swahili on Island Records/Harry J. Records; the single quickly sold half a million copies worldwide. The first Jamaican artist to record Reggae lyrics in French, Ras Midas’s bilingual hit song, “Too Long In The Wind/Tout Long Temps Dan Le Vent” on the “Rastaman In Exile” album (released on the French label, Disc A-Z), quickly climbed the charts in France and French-speaking African and Caribbean countries. “Rastaman In Exile” earned the Album of The Year award in France (1980) and is still regarded as one of the best roots rock Reggae albums of all time.

Inspired by the acceptance of his music in the Caribbean, Europe, Africa, South America and the United States, Ras Midas founded JML Music Productions/JML Records in 1987. Ras Midas produced “Loving Vibration” (1998), “Confirmation” (2000), “Reaching Out” (2006) and “Fire Up” (2010) on the JML Records label. “Loving Vibration” was ranked No. 3 by worldwide music critics in the 1998 Top Ten independently produced Reggae albums category, and “Confirmation” was in the Top Ten for a nomination for a Grammy Award.