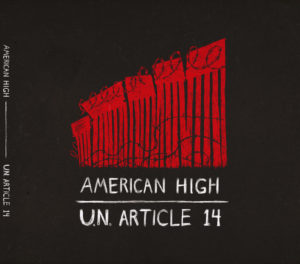 The term “three chords and the truth” is one you get to throw out a lot when you review music, as it relates to a number of different genres. First used to describe the stripped-down, accessible style of both blues and country in the 1940s and before, it took on a new meaning in the ‘60s when singers like Bob Dylan emulated the style of classic American folk (so much so that Dylan’s first foray into electric guitars disappointed some folk purists). That’s not to say that American High’s new album “UN Article 14” sounds like ‘60s folk, per se (though the closing track “Belly” does have a feel and arrangement reminiscent of The Band’s 1968 classic “The Weight”.) Rather, the record jumps around between ska affectations on one song, to pop punk, to a danceable roots rock sound akin to Bruce Springsteen or John Mellencamp. And like those two artists, American High isn’t afraid to pair an accessible pop sheen with an impassioned, political message. The record’s title refers to an article in The UN’s Universal Declaration of Human Rights, which enshrines the right to seek asylum from persecution in other nations. American High uses this album to approach several different political topics from a perspective of compassion and humanism, which I quite appreciated.

An great example of the sort of message songs that appear on the album is “Cheye Calvo,” the track that has the ska-esque feel I mentioned in the previous paragraph. This is a tune I had covered previously when it was put out as a single, and its message remains just as important. A political ballad song that lands somewhere between reggae and pop punk, “Cheye Calvo” is about, well, former Berwyn Heights, MA mayor Cheye Calvo. In 2008 a delivery of a package of marijuana to Calvo’s Arizona home led to a SWAT team breaking in, holding his family at gunpoint and killing two of his dogs. It’s not hard to see why this heinous abuse of power became a flashpoint for civil rights groups, even those outside of the marijuana legalization movement (which, of course, has made some large strides since the incident occurred a decade ago.). “Cheye Calvo,” while functioning as an enraged protest song, also has a laid-back, sunny quality of ‘90s skate punk, partly owing to a catchy “na-na-na” bridge after the chorus. Most of the tracks on the album adhere to a general punk structure—loud, punchy, and under three minutes. “Test Pilot” is a perfect example of this, with its morbidly cheery and irresistible chorus of “I wanna die in a blue sky!”

If I had to pick a dark horse candidate for my favorite song on the record, though, it might have to be the wonderful “Fairfield, CA.” A tale of romantic regret and misery brought to life with a jaunty acoustic guitar and poppy harmonizing, “Fairfield, CA” reminds me of 1990s groups like Gin Blossoms. American High is a group that can tip its hat to multiple music scenes without it ever feeling forced, and one that has a lot of potential.
4/5 Stars

For more information on American High check out their website www.AmericanHighBand.com

Stream Cheye Calvo by American High on Reverbnation www.Reverbnation.com/AmericanHigh1
Or on Soundcloud
soundcloud.com/john-johnson-831037652/01-american-high-cheye-calvo

Maximum model Sherry Nelson is a superstar both inside and out. Currently she is gearing up for some events in the entertainment industry when the world opens up. In the meantime, she is appearing on […]

One of the most prolific, relevant, vibrant, and well-hidden activists is the mastermind of American High Doug Terry. American High is a band for the people! Their anti-war songs on their last album “Bones in […]