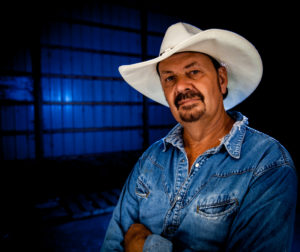 Richard Lynch is coming off a terrific string of hit singles from his breakout album, “Mending Fences.” His duet with Grammy Winner, Rhonda Vincent, “Back In Love Again” topped the airplay charts, along with his solo tracks, “Cut and Paste” and the recent release, “Country Music Isn’t Country Anymore.” We sat down with Richard, to talk about his album, the state of country music, and whether he thought artists should share their political beliefs.

Richard Lynch: No Country Music is not dead! What I see is lots of people searching for the real country music, the traditional country music. The name has been labelled on different types and genres of music that aren’t really country. But people are hungering, looking for the traditional sound and with the internet and social media they can find it, and they then come out to a live event to hear what the long for. We have a huge audience for our music
today.

Congrats on the success of your album, “Mending Fences.” You’ve had some terrific successes in the singles. Any plans for another single from the album?

RL: Yes, we plan to release another song from the album soon.

What is the single biggest challenge facing music artists today?

RL: Getting airplay on mainstream outlets, mainly radio. Our music is well received and critically acclaimed but the only way to get mainstream airplay requires money to get it played. The internet has become the place to get
our music played, just getting to the audience from there is the challenge.

Tell us about a Richard Lynch live show. What should fans expect?

RL: A Richard Lynch Band live show is a group of dedicated musicians who have a huge respect and admiration for traditional country music and for the people who want to hear the music. You will hear some of my all time hero’s songs, you will hear our music and you will hear your favorites that you request! Our live show becomes a gathering of friends and family who love good traditional country music and camaraderie, we see people become friends from
attending our shows. At our barn where we have concerts we say Come for the barn, Stay for the music and Leave with a memory!

What was the first album or single that you bought with your own money?

RL: I think the first album I bought was a Waylon Jennings album; it had “Ain’t Living Long Like This” on it…a song I still perform in my live shows.

Where in the world would you love to play, that you haven’t and why?

Should musicians get involved in politics, including posting about their political beliefs?

RL: I say no, because not all people that love country music don’t have the same beliefs or understand the other “side” of politics, it does not serve the music to alienate half the population.

Thanks for the fantastic conversation! Where can our readers find out more info about you?

RL: You can find me, the band and my music at www.richardlynchband.com. THANK YOU!