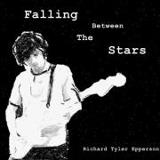 About the Artist: Richad Tyler Epperson is a fascinating musical project based out of Utah. Reading from his bio: It wasn’t until I was around 22 years old when I got the courage to start writing tunes and trying to sing. Which brings me to the modern day, I’m in my 20’s and realizing time goes by sooooo fast so I created a Youtube account and Facebook page in September of 2011. I’ve started recording songs and posting videos as well as playing live shows and plan to continue, hopefully with great support. I’ve just released my 1st CD January 2013. I recorded the whole album in my home studio.

Review: “Falling Between the Stars” is their debut release and it has much to commend it. Admittedly, there is a whole lot of variety to these arrangements and performances. First: This impressive Epperson brings to the table some amazing songwriting skills, solid session performances and impressive production skills. The guitar work and other musical contributions of Epperson are off the charts. Second: Epperson’s vocal abilities hit the mark remarkably by just letting it all hang out. Third: their sound and amazing songwriting touch and is possesses a wide degree of latitude. In fact one could classify Epperson as a four genera artist: Jazz-Folk, Pop, and even a dash of Hip Hop. All songs are a skillful combination of all the aforementioned genera’s. Music will remind you of The Academy Is, We The Kings, Hey Monday. Epperson has the songwriting prowess to be extremely dangerous. There’s also a unique quality to this catalogue that breaks the mold when compared to the overly predictable, forgetful rock that’s been filling the airwaves lately. What am I trying to say – well let me start by saying there is nothing predictable and forgetful about Richard Tyler Epperson.

Conclusion: I’ve always said if you can play it a party, then it’s marketable. The music on Falling Between the Stars is extremely marketable – with amazing songs and music that just makes you feel good, but also has the courage to explore powerful feelings of yearning and lost loves.