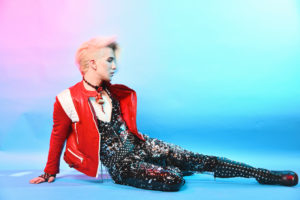 Immersed amongst the depths of the boy band world of “No Authority”, the lead singer then known as Ricky G began his music career.  Immediately signed to Madonna’s record label, the band toured with Brittney Spears where Ricky and the Mickey Mouse Show starlet became fast and furious friends. At around the same time Ricky also befriended Michael Jackson, and actually danced with him.

Fast forward several years, Ricky, now known as “Ricky Rebel” has his own musical agenda. As a solo artist with a unique twist, Ricky has become an internationally acclaimed artist. Having recently returned from a super successful U.K. tour in support of his  latest album, “The New Alpha”, where his hit single “If You Where My Baby” charted on Billboard’s top 40, Ricky is ready for anything now.

I’ve watched his music sensibility churn in various directions with each new release, including: “The Blue Album” to “Manipulator” to “The New Alpha”, however his integrity, fearlessness, and  professional creativeness  remain constant. Thinking way beyond out of the box is something Ricky is a natural at. His ideas and thoughts come to him as a revelation, and his organic sense of the world seem to be contagiously relevant. If Ricky never wrote or sang a song, he would still be a superstar.

Aside from the California based Glam rocker’s musical endeavors, he is also a star-quality top model who has walked for the likes of Stevie Boi, (celebrity designer to the Stars ), has been in the running for the Olympics, and has been a part of the Fashion Police for US Entertainment Weekly. He has walked thousands of Red Carpets, has been done various benefits for the LGBT community, and teenage cancer as well. He’s appeared in numerous Prides, and has recently done a project with the son of the Hurdie Gurdie man himself Donovan Leitch.

One can only guess what’s next for this rising star…. perhaps some more re-inventing Glam Rock, and definitely his own record label…..”Rebel Mafia Records”…. Keep a watchful on Ricky Rebel, as there are big things soon to come. 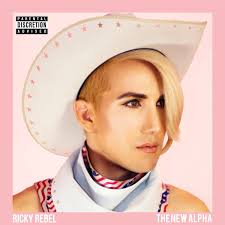