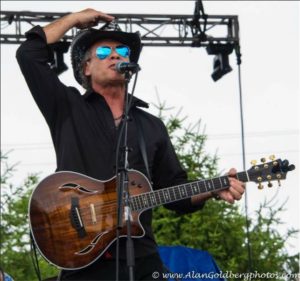 “River Road,” the new song by The Gary Douglas Band, has been hard to miss if you’ve been listening to good radio lately, and for good reason. For those who aren’t in the know, the dynamic Americana of this New York-based outfit (led by none other than lawyer/troubadour Gary Douglas) has been electrifying live audiences and garnering a mammoth sized amount of press buzz in recent years. “River Road,” sees him bring legendary producer Niko Bolas into the fold, along with a variety of musicians among the most leading in Nashville.

The track opens up with the band breaking through a brick wall of silence, guitars and drums galloping after each other, and a grinding organ trailing behind them. There’s so much nobility in Gary’s voice, almost like a weathered traveler who still takes to the road because he knows that he belongs there. The lyric “Take my hand, I wanna feel more than iron and steel,” is so profoundly emotional in its delivery, especially for any of us who grew up in the quiet, “nowhere” towns of the Midwest. Who would’ve thought this cat was from Brooklyn originally? He sounds like he grew up with me and my friends on the Front Range in Colorado, where long hot summer days gave way to sunsets over the Rockies, the sun seemingly able to escape out of our little town to whatever life was on the other side of those mountains.

Gary gives us really impeccable social commentary about the cold and disconnected nature of labor and industry in America, a commentary which sadly has become more and more relevant with each passing year it seems. The mighty effervescence around the guitar solo dueling with the saxophone sort of replicates that struggle between the urban and the rural to find a way to coexist with each other. I found myself getting emotional when I was listening to this song; as its relatability gets almost too intimate in some places. This guy really gets it. There’s a fire that burns really hot when these guys get together and play music, and that fire seems to warm even the frostiest parts of our soul. “River Road” maybe should have been titled “White Water Highway,” because it is nothing short of a thrill ride.

I am very excited to hear The Gary Douglas Band’s new album, Deep in the Water, which is set to drop in the near future, and definitely am making a point to see these guys live when they come through my town. For a city boy who has devoted most of his life to jurisprudence and the science of public policy, there is no pretentious intellectualism or hidden agenda in these lines, no overproduced, polish dripping overdubs or samples, no cheats or hacks to make this music sound more legitimate than it really is. Those who say there’s no such thing as an honest lawyer need to make a point to hear “River in the Road,” a spectacularly honest, earnest rock ballad by a genuinely awesome songwriter (who also just happens to practice law).

Learn more about The Gary Douglas Band’s music and mission at garydouglasband.com, and watch for Deep in the Water, soon to be available everywhere good music is sold.