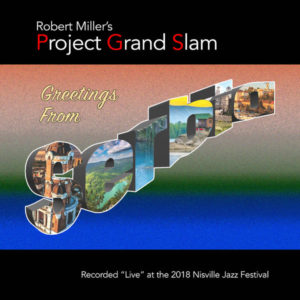 Last August, far away from the comforts of a posh New York recording studio, Robert Miller’s Project Grand Slam took the stage at the Nisville Jazz Festival and left the crowd absolutely awe-inspired by the intense guitar shredding, sax soloing and vocal wooing of the young but iconic jazz collective. That performance was recorded, mastered and designated fit for delivery some five months later in January, and inside of the ten songs that it yielded listeners are treated to Project Grand Slam’s greatest work yet. Starting with the lumbering “You Started Something” and finishing with a ram-slam cover of “Fire,” Greetings from Serbia gives us much more than sweet salutations from the Balkans – it solidifies PGS as perhaps the most endearing and evocative band in all of contemporary fusion.

Robert Miller has never sounded as disciplined and on-point as he does in this record. Alongside drummer Joel Mateo, percussionist Guillermo Barron Rios, saxophonist Mario Castro, keyboardist Baden Goyo, guitarist Tristan Clark and the brilliant Ziarra Washington behind the microphone, the group draws the best from each other artistically as they dazzle us in workouts like “Lament,” “Free” and of course their breakthrough cover of “I Can’t Explain,” which is even more danceable on this album than it was in music video form. The fluidity between the tracks is surprisingly smooth despite the somewhat obvious rearranging of the set list for the purposes of transforming the performance into an LP. Every member of PGS is in top form here, and none ever feel compelled to try and overshadow the player standing next to them with unnecessary (nor unkempt) bells and whistles.

The tonality of the band isn’t lost in the translation from the stage, which from a production standpoint can be pretty hard to do with live albums. “No No No” particularly sounds rough around the edges, but the PA system doesn’t wash out the color in the bass or the slickness in Washington’s vocals. Here and in both “Gorilla” and “The Queen’s Carnival” there’s a lot of augmentation in the bass and treble, but if anything it helps magnify the smaller intricacies within the instrumentation. The percussion never stops galloping, and god knows that those sax solos are about as pushy and physical as any I’ve heard in the last decade or so.

For being a live piece, Greetings from Serbia is very textured and colorful, which really says a lot about just how awesomely skilled Project Grand Slam really are. They don’t try to water down any of their ambient cues or the mathy qualities in their arrangements; instead they dive head first into the deep end of compositional creativity and reemerge with a plethora of sonic gems to be appreciated for a generation to come. What I love about this record is that as indulgent as it is around every one of its many twists and turns, it doesn’t devolve into the sort of egotism that kills full-flavored jazz anthologies of a similar construction. The caliber of the content is beyond A-grade, and anyone looking to start off 2019 on a high note would be wise to acquire this album the day it comes out.

The music of Project Grand Slam has been heard all over the world due to the promotional services offered by Danie Cortese Entertainment & Publicity. Learn more here – www.daniecorteseent.com/