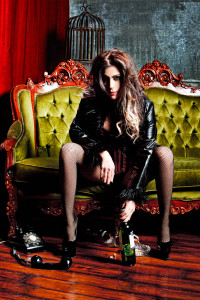 www.robynz.com
Genre: Pop
Subgenre: Goth Pop
Location: Miami, Florida USA
From the time Robyn Z. was in her mother’s womb, she was able to thump to the beat of music. She was a natural born singer. As a little girl, she had a bright neon green record player, a disco ball illuminating from the ceiling, and would spin vinyl records dancing and singing with her well-rounded brush. She would sing Diana Ross, Irene Cara, Madonna, and Michael Jackson creating her own staged theatrical performances with her friends and family as the audience members.

Later, the long brown haired, brown eyed starry eyed child made everyone’s jaw drop from the moment she walked into New York hot spots, wearing nothing but her wonder woman bathing suit, amongst beautiful glitter eyes made up of swirls of the rainbow, with lips pouting, the moment she opened her mouth to sing, the crowd applauded her with standing ovations.

It should come as no surprise, that this brown eyed little girl, turned and transformed herself into the electrifying and shocking multi talented artist that she is today: Robyn Z.
“When I was a child, I pushed the envelope in my voice, theatrics, performances, acrobatics, and my artistry” Now I’m taking my fans
And myself to a whole new dimension. “We are the future”: states Robyn Z. President of her multifaceted record label Encoded Entertainment, LLC.

Robyn gained notoriety for her first record release “Good Love” released in 1995 by DM Records. Her performances took a wild turn, making her name go up in lights in local headlines and billboards from Miami to California.
Robyn performed amongst torches lit in flames and men in hoods as crowds stared in awe. Robyn Adds, “I stopped by radio stations to beg them to add my record. We rocked it out in every club”

The most amazing thing was that the club owners, could not believe that major acts could not pack the clubs, but I did. I have always had an eclectic taste for all musical genres. However, my passion and heart is in Pop, Rock, Hip Hop, and theater. It all meshed for me at a very young age. However, it was not until recently that I realized I was inventing my very own character. Something that internally shook me up, that nobody else has.

Robyn Z., whose nickname hails from everyone in high school calling her just “Z”. It is rumored that Robyn has an alter ego in which she nods, stating “Yes, and she could very well be my new stage name leaving Robyn Z. “I feel my alter ego has all the power and beyond in the universe. She will dominate the world by her character story and life altering music” 2011 is not about getting up on a stage, or cutting a record. It is about so much more than that, and I am prepared in telling the world in my own voice, my own real life stories, that this is who I am and what defines me today and for the future. There are many goals I want to accomplish. I am just getting started again”
Her goals are within arms reach. Robyn was accepted into the University Of Miami’s music department on a full scholarship right after graduating high school. She left it all behind, for what some may say is “insane”. By 18 she was getting gigs with cover bands and went on the road. Her vast knowledge in the music industry combined with her street smart classy attitude got her right through the doors at record labels. She was offered to sing on numerous record releases in recording studios for artists, as well as being an opening act herself for major headliners. Before her first release on her own label in 1999 gaining national distribution on her own as well as attaining National radio play, Robyn knows the game and can play it well. She has earned the respect of her peers in the industry and definitely holds the golden key to what will be the re-invention.

“My goals as an artist, is to break down the barriers and kick down the walls of the typical boring “institution” whereas everyone wants to be like the next artist. That is not in my veins, and truthfully the world is sick of hearing and seeing the same thing”. I was and will always be different and that is what separates me from the majority of the “pop-u-lation” States Robyn: I want to be well respected as an artist who writes her own lyrics and melodies as well as spearing most of her projects as executive producer. I wore green tights with pink and red tops when I was a kid. I am just “Me” and nobody can make me into a carbon copy. “Music is my medication, I want to make the world feel better one dose at a time”
On “Secret Society”, her debut single slated for release, in May 2011, she made a very powerful potion. While carefully acknowledging and adding all of the ingredients necessary. As if it was taking its time, much like a chemist in a lab. Once the potion is released, the world will feel and resonate the ripple effect of her own characters stance in this chaotic world.

Robyn has successfully achieved enough record releases and more, which has made now made her eligible to become a Grammy member. “Secret Society” and many more are patiently awaiting their arrival to what Robyn calls “The Pop-U-Lation”. It is safe to say that it looks as if Robyn, and her alter ego have paved the road for stardom.

As she leads into her upcoming album scheduled for release in late 2011, she is ecstatic. Each record she has, reveals so much that the world shall resonate with. She is well aware that her fans and the public will morph into one with her.

“Change is necessary, and I have evolved dramatically,” states Robyn. “I was not a child who had it easy, or born into a famed family. I had a hard life growing up, however that is made me who I am today and I thank everyone who helped me better myself”

This seasoned veteran is a force to be reckoned with. Robyn States: “You know, in paying my dues, in some bizarre way, I am blessed that I did not hit the top years ago only to fall down and be crushed”. “I would rather it be this way, where I have literally worked from the ground” and this little starlet in the making will be skyrocketing straight to the top. We see this all to often in the industry. Robyn adds: “I need to be as good as my last record”, and that she certainly is.

She has an entire lineup of hits ready to roll out on her highly anticipated album and on the right road.

Robyn Says “I have had bites and tastes of fame only to prepare me one little dose at a time. It is not all about the fame, but what is in thy name”

Robyn Z., Rebellious Warrior Combating The Secret Society, Shall Sing Until Her Throne Is Won

Robyn Z., Rebellious Warrior Combating The Secret Society, Shall Sing Until Her Throne Is Won. Recording Artist tackles the controversial topic of secret societies and the Illuminati in an enigmatic anthem, sure to entertain while enlightening. Robyn Z’s single and groundbreaking video are being simultaneously released on June 8th, 2011.