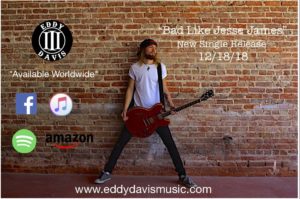 The young rockstar ‘Eddy Davis’ is set to release his debut single entitled “Bad Like Jesse James” on all major digital retail sites, on Dec 18th, 2018. He will also be featured on the ‘Live At Willie’s House’ tv show on the same day as the release to promote his new single.

At five years old, Eddy began taking guitar lessons with mentor, Daniel Yancey, at the Yancey Music Center in Ormond Beach, Florida. It was Eddy’s father that introduced him to his first influences – The Beatles, Joe Walsh and The Eagles and The Beach Boys. As he got older and his guitar playing developed, bands like Black Sabbath, Led Zeppelin and AC/DC drew him in with their heavy blues turned aggressive, in your face rock and roll. His vocals are melodic and expressive like Jeff Buckley, yet possess the palpable tone of Chris Cornell. His wide vocal range can be compared to Matthew Bellamy (Muse), Robert Plant and Rod Stewart.
And while his lyrics contain an innate intuition, they hold a substantial
amount of maturity in the craft of songwriting.