Rocky Kramer will be hosting “Get Ready To Lep-Rock-On All Night Long” on this week’s Rock & Roll Tuesdays Show on Twitch. Tune into Twitch on March 16th, at 7 PM PT for this amazing show. 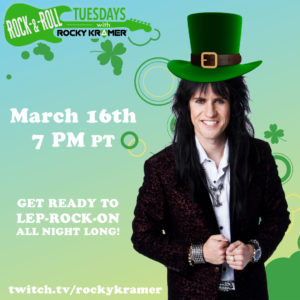 Rocky Kramer is a guitar virtuoso, often being compared to the greatest guitar players in the world. Rocky recently performed at the SohoJohnny Let Me Help Inc/ #IAmNoJoke benefit concert along with some of the greatest musicians on the planet including Ozzy Osbourne, John Lodge, Steve Vai, Leland Sklar, Kenny Aronoff, Tommy James, Verdeen White, Ten Years After and Rick Wakeman.
Rocky’s first studio album, “Firestorm” is now available worldwide through Allied Artists Music Group, together with an epic music video of his #1 Global DRT Chart topper single, “Rock Star”, that also picked up a Best Rock Performance nod at the 2019 Hollywood Music In Media Awards (“HMMA”).

The official music video for Rock Star by Rocky Kramer. The Rock Star single out now! The Firestorm album out now! Behind the scenes: www.youtube.com…

Watch “Get Ready To Lep-Rock-On All Night Longs” with Rocky Kramer during Rock & Roll Tuesdays on Twitch here:

Rocky Kramer will be hosting “Prog VS Glam Rock” on this week’s Rock & Roll Tuesdays Show on Twitch. Tune into Twitch on Tuesday, August 17th, at 7 PM PT for this amazing show. Rocky […]