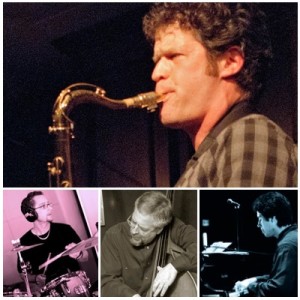 ABOUT ANTON. Jazz saxophonist Anton Schwartz has been drawing listeners in with the power, spirit and subtle complexity of his music since he bounded onto the San Francisco jazz scene in 1995. Anton quickly gained an enthusiastic following as music fans responded to what the San Francisco Chronicle called his “warm, generous tone, impeccably developed solos and infectious performance energy.” In the years since, Anton has won over listeners and critics at high-profile jazz venues across the country, including the Blue Note (NYC), Yoshi’s (SF), Blues Alley (DC) and the Monterey Jazz Festival. His four CDs have earned sterling reviews and strong airplay, with his most recent CD, Radiant Blue, reaching Number Four on the national jazz radio charts.

ABOUT THE QUARTET. Anton Schwartz joins forces with three of Portland’s finest jazz talents. Schwartz and pianist Randy Porter have collaborated on numerous projects over the past six years, performing together at such venues as Yoshi’s (Oakland), Scullers (Boston), The Jazz Standard (NYC) and Kuumbwa (Santa Cruz). Here they are joined by the exceptional team of Tom Wakeling on bass and Jason Palmer on drums.