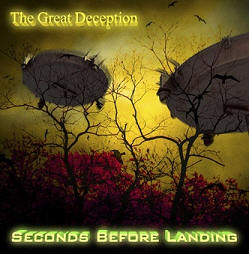 This latest effort is one release that certainly doesn’t disappoint. This is one musical unit that brings to the table effective songwriting via a highly diversified musical delivery and musicianship that will make you dizzy. This meshed with a one in a million Prog-Rock sound and well-rounded songwriting make for an effective combination. Seconds Before Landing even touch on Hard Alt-Rock with hints of Jam Band, and Ambient-Theatrical Rock. All songs are wonderfully simple but masterful in their overall arrangements. Music reminded me of a cross between Chevelle, 10 Years, Evans Blue and even elements of Dream Theatre. This CD though a bit winded with much in the way of overly-sonic musical meandering it’s still quite entertaining and almost fascinating overall with an amazing vocal front and production expertise of Crispino. If he just so happened to write all these songs well he could be bigger than any of us realize at the moment. All songs are amazing via well-crafted pieces and top flight musicianship. There are some incredible moments on this CD. Many songs simply personify the human experience which gives Seconds Before Landing an amazing feel in its attempt to connect with a fanbase locally or abroad. Favorite Track: Right Before Your Eyes

Bottom Line: At least for me Seconds Before Landing affirmed my faith in music again. John Crispino and company area unique, hardworking group of artists that knows their way around a studio, and know how to write you a compelling piece of music. At the end of the day The Great Deception is one hell of a wild ride and delivers an action packed 45+ minute catalog of musical exuberance. It also covers all the bases delivering music that covers all the bases: Alternative Rock, Hard Rock, Ambient Rock.