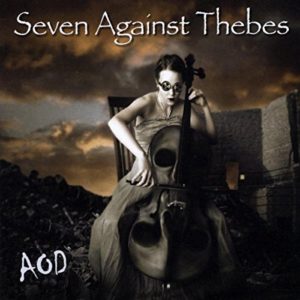 Anger. Disgust. Angst. All of these are the sort of elements one might expect from a band that labels itself as a “platform for misanthropy,” or essentially a latent disgust and distrust of the human species. But what one might not expect from the same mentality is an artistic sensibility that in fact celebrates the beauty of what humankind can achieve, delivering hard-punching lyricism alongside a prog-rock meets grunge metal soundscape that showcases true musical ability. Yet that’s exactly what’s waiting for fans of Seattle’s Seven Against Thebes and their latest effort, Art of Deception.

Founded in 2007, the band is comprised of Cyrus Rhodes (guitar, songwriting), Bruce Burgess (drums), Mr. Black (bass), and Rusty Hoyle on vocals. Building around Rhodes’ searing anti-establishment lyricism that simmers with latent hostility at points, the collective has developed a sound that merges the elements of prog rock together with the angst-filled grunge of their native Seattle, recalling the sound of bands like Tool, Alice in Chains, and Stone Temple Pilots.

Art of Deception starts, well, rather deceptively, with the slow burning fuzzy guitars and throbbing bass tones of the instrumental “MMXXII,” the almost haunting tune setting the tone for the Alice in Chains-flavored diatribe against marriage “’Til Death Do Us Part.” Hoyle’s vocals are spot-on and Rhodes’ guitar runs hold strong, hammering home his message in more ways than one. “Collision Course” amps things up even more, with moody vocal tones and a thumping rhythm that keeps drummer Burgess more than busy while “Killing Time” showcases more of Rhodes’ stirring chops on guitar over against a lyric that rages against the apathy of the millennial generation.

Picking up again on the Seattle sound, “Mastervision” is a great listen as is the frenetic “Fly Paper,” with its ranging musical solos that set up the explosive vocals from Hoyle as he rages with all he’s got. “Judas Kiss” carries a similar energy, Mr. Black’s solid bass playing keeping time throughout as “Slave 2 The Needle” celebrates the artistry of the tattoo with big chops, shouted vocals from Hoyle and almost blues-influenced guitars from Rhodes that deliver solidly. The title track brings its own energy to bear, a subtle vocal through the verses before emerging into a raging fire in the chorus, the band chopping through musical wood to build the fire high.

And while Seven Against Thebes brings more than their fair share of big, bold sounds to the forefront, they actually shine even brighter on the tracks that are far more subdued. A track like “Ashes To Ashes” is simple, featuring essentially bass and an almost whispered vocal but it stands in possession of the promise of musical violence, the tension ripe beneath the bass notes. Album closer “Yama” draws from a similar blueprint, keeping the tension at a taut simmer that is almost as compelling as when the band lets it out all the way. Add in the unique instrumental “8 Husbands of Cleopatra” and you’re staring at a great album.

Seven Against Thebes’ Art of Deception is somewhat deceiving in and of itself. At the outset, it posits itself as a record that is full of anger and disgust with the human condition, it’s music at time reflecting that in its cacophony. Yet, underneath those layers there is a requisite beauty in the tension that the band holds musically, maintaining the line between love and hate, good and evil with tense care. And it results in a kick-ass listen.