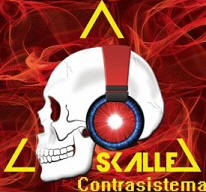 Skalle is a 2 member band from Souuth of the border (Montery Mexico) Elctro-Fusion band that just released the debut CD Contrasistema. This is one release that certainly doesn’t disappoint. This is one artist that brings to the table effective songwriting via a very original sounding musical delivery. This meshed with a one in a million Electronic-Fusion-Rock sound makes for a very effective combination. “Contrasistema” even touches on Psychedelic-Pop of the 1970’s almost as if you’re listening to a 2 or 3 different bands. Trust me when I say this duo can play a wide range of musical styles and genera’s. All songs are wonderfully simple but masterful in their overall arrangements. Some of the production touches remind me of Power–Pop bands. This CD is quite entertaining overall with an amazing amount of passion and musical unpredictability. You never know what’s waiting for you around the next corer. The overall score and writing abilities of David Adrian and Carlos X are very appealing via well-crafted pieces, top tiered sampling, effects, and drum performances that may make your head spin. The overall production value is very in your face and thrashes the musical envelope. Favorite pieces are ‘Sleepwalker” and “Lights, Beat, Dance.” But there’s plenty of mystery and mind blowing moments to go around on “Contrasistema” which gives these guys an amazing feel in his attempt to connect with a cult fanbase down in Mexico or here in the US. “Contrasistema by Skalle is a cutting edge production. Skalle have effectively proven themselves with this latest release. All 2 members especially Adrian are clearly capable songwriters, artists and composers.

I must admit “Contrasistema” made it from my home stereo to my car stereo which is where it is now. All pieces stuck with me melodically long after the experience was over usually indicates he is something special about the artist or band in question.