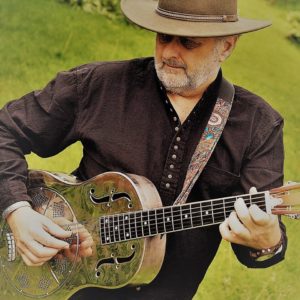 The exotic, rattling start of “The Girl With the Rattlesnake Heart,” the new single by Steve Bonham and the Long Road, conjures images of a weary traveler making camp at dusk and sparking up a campfire, beside which he plans to spin his latest yarn. Bonham acts as our storyteller in this song, sitting beside the roaring embers of his band the Long Road, who dispense fiery acoustic thunder in the backdrop as he plaintively tells his tale. There’s nothing reserved about his lyrics; Bonham has been around this wicked world, and he knows of the sinners who call it home. He’s looking for a girl who is evading him with illustrious skill, but the tone of his voice says he’s not about to give up so easily. The blaze burns on as we descend into the chorus of the song, and if you’re tough enough to stand the heat from the flames as it penetrates the speakers in the form of a rigid bassline, then you’re in for quite the adventure with “The Girl With the Rattlesnake Heart.” Steve Bonham didn’t just churn out a fun new single for us in this song; he and the Long Road assembled an engaging introduction to their intriguing style of folk-rock.

Our singer might not be reserved in his prose, but his performance is nonetheless quite insular by nature. Bonham hides behind the smokescreen of the melody in this track as if to suggest that he doesn’t want to be the center of our attention here; the music is, after all, just as evocative as his verses, but it’s markedly more ominous in its tone. The harmony between he and the instruments is stellar, cerebral even, but it too plays second fiddle to the strut of the pushy percussion. The pulsating beat never gets any less tense than it does as we approach the chorus, but that’s exactly what made me fall in love with this single as much as I have; the climax is the tension that’s building around us. Instead of being a frustrating experience, this concept makes “The Girl With the Rattlesnake Heart” a seductive sonic temptress, who makes no attempt to conceal her true intention – to trap us in these angular rhythms and subsequently smother us with a gorgeous melody.

Haunting, dark and evocatively groove-laden, Steve Bonham and the Long Road’s new single was designed with Bonham’s hardcore fans in mind but satisfies outside admirers of folk-rock just the same. Other than the melodic cushion generated by Bonham’s striking vocal, this is an unforgiving track that basks in its eccentricities and shamelessly celebrates its rough edges, which in my opinion makes it quite a find in today’s stagnant music market. I also think that relative to past works, Bonham seems a little more confident in his performance here. The Long Road has come into its own musically, and I think that this single represents a turning point for the group as a solid unit. Based on the strength of this latest release, I’m quite excited to see what they have in store for us next.

The music of Steve Bonham has been heard all over the world due to the promotional services offered by Danie Cortese Entertainment & Publicity. Learn more here – www.daniecorteseent.com/