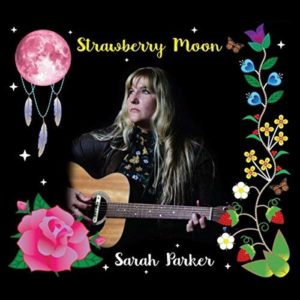 The comforting hum of an organ. A soft vocal to remind us of our humanity. Playful guitars that beg for us to remember a simpler time. “You Can’t Tell a Heart” is one of the humbler songs I’ve reviewed recently, but it has a way of really sticking with you after you’ve heard it for the first time alongside its thirteen companion tracks in Strawberry Moon, the new album from acclaimed country singer/songwriter Sarah Parker. Both this tune, the title track, “Rose Hill” and the blazing “Sugartown” must have played over in my head a hundred times recently since coming across this LP, even though none of them share the same beat or narrative. The reason why isn’t as confusing as you’d might think, if we take a second to breakdown this awesome new record.

Strawberry Moon is a fourteen-song walkthrough of the artistic identity of one Sarah Parker. This is Parker’s official debut, and she spared no creative expense it making it everything it could be. There’s swing in “You Can’t Tell a Heart,” “Even When You’re Lonely” and “Keep on Movin’ (The Train Song);” a bit of rollicking balladry in “Road to Your Discovery,” “Talk in This Town” and “Lonely Highway;” and even a touch of folk-pop grit with “I Got to Wander” and “Gypsy Rose.” While each of these songs is a different take on a familiar strain of Americana, they each have one thing in common: the searing tonality of Parker’s divine voice.

Parker can sing. That’s putting it, well, more than mildly. Parker is working with a voice that seems to break through any wall of sound, no matter how intensely mixed or broadly conceived that wall may be. She can penetrate anything. The contrast between the tracks aesthetically, the lyrical differences, even the minute production cues that make one song a little moodier than another – all of this takes a backseat to what she does with the mic in her hand on this record. “Lonely Highway” and “Straight from the Bottle,” would not be as moving as they are here were she absent from the roster. Parker’s seductive crooning in “Road to Your Discovery” is what keeps the entire vibe of this album from going off the road and into a pure elegy-driven country.

A profound poet among us has emerged in Strawberry Moon, and her name is Sarah Parker. Not to be confused with the actress of the same name who bears a much more suspect skillset, Parker carves out an identity all her own in this record through a combination of witty, surreal lyricism that draws from her own personal experiences as well as common-sense storytelling with a feisty accent, and focused musicality that instantly takes an old fashioned country girl like me back to the one place I’ve always called home. Her style is still developing, undoubtedly more so with all of the attention this record is receiving right now, but I have no qualms with saying that she’s just perfect the way she is. Parker’s Strawberry Moon is everything one looks for in a smart new country album, period.